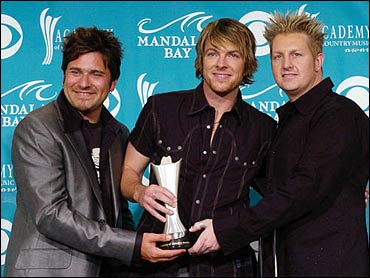 Rascal Flatts' Jay DeMarcus still gets riled when he thinks about how he sat in the studio and watched someone else play the bass parts on the group's first album.

"I thought, 'I'm the bass player in the band, but I've got to learn his parts? This sucks,' " DeMarcus recalls of the 1999 session.

That's not what he, guitarist Joe Don Rooney and singer Gary LeVox -- who grew up with DeMarcus in Columbus, Ohio -- had in mind when they came to town. By their second album, "Melt," they began asserting themselves, with DeMarcus and Rooney playing some of the parts. On their third, "Feels Like Today," they were playing most all of them.

These days, Rascal Flatts, which released its fifth album Tuesday, "Still Feels Good," is a rarity in Nashville, where solo acts and duos dominate: an honest-to-goodness band.

The group also bucks Nashville conventions by writing many of their own songs, playing their own instruments on the road and in the studio and co-producing their own records. (There are obvious exceptions, but the Nashville norm is for singers to rely on outside songwriters, use one set of musicians in the studio -- often the same core of "A list" session players -- and another set on the road.)

"I didn't spend my whole life getting to this point of following the dream of making my own records to sit there and watch someone else do it," DeMarcus says. "You know, the Rolling Stones were not the greatest musicians in the world. They were not virtuosos. But they were the Stones. If someone else had played those guitar parts, it wouldn't be the Stones."

The group has become one of country music's monster acts, selling 5 million albums last year alone with the album "Me and My Gang." Last year, Billboard magazine named them country artist of the year, and the Country Music Association awarded them country group of the year for the fourth time in a row.

Their first single from the new album, "Take Me There," hit No. 1 on the Billboard country chart after only 10 weeks, making it the fastest-rising song of their career. The song was co-written by Kenny Chesney.

"I think he tried to cut it for his record, but he had to lower the key and thought it lost some of the power when the chorus came around," DeMarcus says. "We were the first ones he thought of when he decided he was not going to do the song himself. When we heard it, it was a no-brainer."

Chesney says of the Rascal rendition: "I am very proud of the record they made on it, and couldn't have been more prouder of it if I had put it on my record."

The most country-flavored track on the new disc, "Winner at a Losing Game," is a dead ringer for mid-'70s Eagles. "She Goes All the Way" features actor Jamie Foxx, a longtime friend of LeVox's. Their cover of the Beatles' "Revolution" is a bonus track for fans who download the album.

Individually or collectively, Rooney, 32, DeMarcus, 35, and LeVox, 37, wrote five of the 13 tracks. They took four months off the road to record it and again called on Dann Huff (Keith Urban, Faith Hill) to help produce.

"Each album has been an evolving thing," LeVox says. "Each one has gone to another level, and we believe this fifth one is yet another level. It may be some of the best stuff we ever put out."

DeMarcus and LeVox are second cousins who grew up playing music together. DeMarcus moved to Nashville in 1992 and earned his first record deal as part of a Christian group called East to West. He persuaded his cousin to quit his job with the Ohio Department of Mental Retardation and join him in Nashville five years later.

The two linked up with Oklahoma native Rooney when their regular guitarist couldn't make a gig, and they've been together ever since.

"We've stayed as tight as we can on the road. We can all be taking separate buses right now, but we're not," Rooney says. "We enjoy being together and leaning on each other."

Since their 1999 debut they've sold 15 million albums, but not without criticism. Early on, they were derided as lightweights, too slick and too manufactured.

"They came out at a time when the Backstreet Boys and 'N Sync and the whole boy band thing was in," recalls their longtime booking agent Rob Beckham, senior vice president at William Morris Agency. "Whenever someone called them a boy band, we were amazed because typically the boy bands were singers and dancers, they didn't play instruments."

DeMarcus says they don't pay attention to what critics think. But they do care what the industry and old guard institutions like the Grand Ole Opry think, and it worries them.

"I think sometimes they think of us as young punk kids that don't have appreciation for Lefty Frizzell and Hank Williams Sr. and people like that, and it blows my mind because those are the people we grew up on," DeMarcus says. "But we wanted to leave our mark and our unique impression upon the industry.

"I think the tide is turning a little bit in country music, and I'm proud to say we're part of paving the way for artists to do something a little more, to be a little edgier and do something outside the box."
By JOHN GEROME