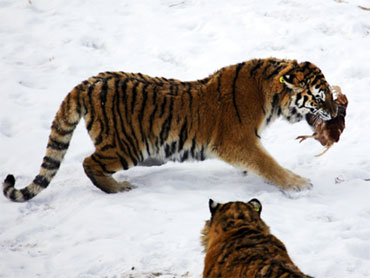 The tiger pounced on driver Jin Shijun and dragged him into the forest after he got out to check on his bus, which was stuck in the snow at Hengdao Hezi Tiger Breeding Center, the world's largest Siberian tiger breeding base in the northern province of Heilongjiang, the official Xinhua News Agency said.

The bus was full of tourists visiting the breeding center, and Jin broke safety guidelines by leaving the vehicle, the report said. Park employees tried to distract the tiger with firecrackers and tranquilizer darts, but when they managed to get to Jin, the driver was already dead.

The report on Monday's attack cited a spokesman at the base, which has about 1,000 Siberian tigers.

Siberian tigers are one of the world's rarest species. An estimated 300 are left in the wild, but more than 5,000 are kept on farms and wildlife parks across China.