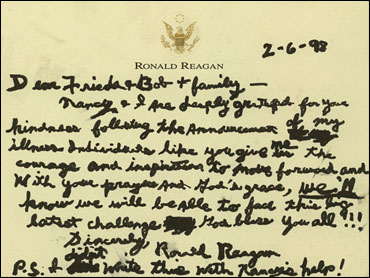 An unusual item written and signed by the late President Ronald Reagan has surfaced on the autograph market.

Reagan wrote the note to a friend in February of 1998, about four years after he mostly disappeared from public view following his announcement that he had Alzheimer's Disease. In the letter he told a friend, "Individuals like you give me the courage and inspiration to move forward, and with your prayers and God's grace, we'll know we will be able to face this long latest challenge." He adds a P.S: "I didn't write this with Nancy's help."

Bill Panagopulos, president of Alexander Autographs in Greenwich, Conn., will auction the letter next month. Panagopulos tells CBS News White House correspondent Peter Maer that Reagan's handwriting appears to be "very labored." Panagopulos says it could be a "one of a kind letter."

The autograph dealer believes the item could bring up to $9,000 at auction.

"Reagan has always been very strong ... Reagan was a popular president, even more popular nowadays with Republicans in power," Panagopulos said. "His letters and signed photographs and messages are very much in demand. He brings a very strong price."

Hear Peter Maer's interview with Bill Panagopulos
While letters and documents signed by Reagan are fairly common, "I don't think there could be more than a handful of letters from that period in his life."

It's quite jarring to see it, especially for those familiar with Reagan's "normal" handwriting," says Maer, who covered the White House during the Reagan administration.

"It's a very labored handwriting, done under great duress on his own part, and it shows me a great deal of bravery, strength and courage on his part," Panagopulos said. "He didn't have it typed, he hand-wrote it, which made it very special. Clearly these were special friends of his."

The cold war crusader whose sunny optimism made a nation believe it was "morning in America" died June 5, 2004, at the age of 93.

"He became an enduring symbol of our country," said President Bush at Reagan's funeral.

"He was the most plainly decent man you could ever hope to meet," added his son Ron.

Reagan battled the effects of Alzheimer's disease for a decade before passing away. He returned to the spotlight shortly before he died, as his health deteriorated and his wife, former first lady Nancy Reagan, began to publicly support stem-cell research as a way to find cures for Alzheimer's and other diseases.

On Nov. 5, 1994, in another handwritten letter, Reagan told the American people that he had entered the early stages of Alzheimer's disease. "I now begin the journey," he wrote, "that will lead me into the sunset of my life."

"I only wish there was some way I could spare Nancy from this painful experience," he said at the time.

Like all U.S. presidents, Reagan was celebrated by some and vilified by others. But by any measure, his life was remarkable for its diversity in occupation and in more personal matters.

During his life, Reagan distinguished himself as a college athlete, a movie star, a leader of actors' unions, governor of California, and, of course, president of the United States. Any one of those achievements could mark the pinnacle of an individual's life. Reagan did it all.

At age 69, he became the oldest president (and the first divorced man) ever sworn into office.

Reagan was viewed as a popular president. A Gallup Poll showing overall presidential approval ratings ranks him fifth among all who have held the office. (John F. Kennedy is No. 1, followed by Dwight Eisenhower, George Bush, and Lyndon Johnson.) Reagan's approval rating average was 53 percent. At its highest, it was 65 percent and, at its lowest, 35 percent.

As is the custom for former presidents, the U.S. Postal Service issued a stamp honoring Reagan a few days after his first birthday after his death, on Feb. 9, 2005. However, the affection for Reagan remained so strong that the stamp had not the usual one but four launch ceremonies: at the Reagan Library in Simi Valley, Calif., in his hometown in Illinois, in Sacramento where he served as governor, and in Washington, where members of Congress and members of the Reagan Alumni Association attended.

In 1996, author Garry Wills wrote in The New York Times magazine, "Who else has Reagan's personal qualities: self-assurance without a hectoring dogmatism, pride without arrogance, humility without creepiness, ambition without ruthlessness, accommodation without mushiness? How can you beat that?"

He also had his formidable wife, Nancy, who was like a lioness when it came to protecting her husband and helping him in his endeavors.

Ronald Wilson Reagan was born Feb. 6, 1911, over the store where his father, John, sold shoes in Tampico, Ill. His mother, Nelle, raised her children as Protestants and coached a small dramatic group, which is where Reagan might have caught the acting bug.