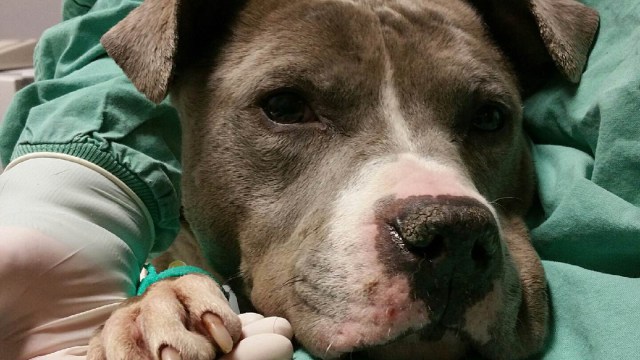 Cody, a smoky gray pit bull mix with soulful eyes, has both male and female genitalia.

"You can actually see the vulva and the formation of what are really small testicles," said Kristina Rinaldi, executive director of the DDR, to CBS Denver.

Cody will be both spayed and neutered by a reproductive specialist at Michigan State University.

"It is very, very rare," Rinaldi said. "I haven't seen it in my rescue career."

Rinaldi was unaware of any statistics on the occurrence of hermaphrodite dogs, but the condition is extraordinarily rare in dogs, especially a cross bred dog. Treatment is usually neutering, to avoid complications like prostate cancer, reports CBS Detroit.

Cody is ailing from distemper and malnutrition.

It's unknown where Detroit Animal Control collected Cody or if anyone was previously aware of his or her condition, reports CBS Detroit. DDR wants to get Cody healthy, have the neutering procedures, and find her or him a forever home.

They're also considering turning Cody into a kind of therapy dog for transgender young people.

"We also may want to use Cody to talk to teens who maybe are going through the same things, we want to reach out to Affirmations in Ferndale and maybe we can use Cody as an example that there's nothing wrong with you, it's not strange, it happens to the best animals and the best people ... Maybe Cody can help some other people deal with some feelings they may be dealing with," Rinaldi said.