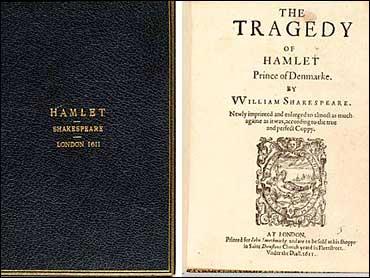 A rare edition of William Shakespeare's "Hamlet" could fetch well over $1 million when it is auctioned at Christie's in New York.

The nearly 400-year-old book is one of 19 copies of the 1611 printing of known to exist, and is the only one remaining in private hands. It was owned by Mary Hyde, Viscountess Eccles, a reknowned New Jersey book collector and English literature scholar best known for her extensive Samuel Johnson collection, now at the Houghton Library at Harvard University.

While other rare finds from Lady Eccles' collection are also being auctioned Wednesday, early editions of "King Lear," "Richard II" and "Macbeth" among them, the "Hamlet," because of its condition and rarity, is expected to attract the most attention. Christie's has estimated its worth between $1.5 and $2 million.

How much it could command depends on a number of factors, explained Francis Wahlgren, a senior vice president in charge of printed books and manuscripts at Christie's in New York. "It's difficult to say how passionate buyers are going to be" about an item, he said.

But he noted that in 2001, a Shakespeare First Folio - a collection of plays published after his death - fetched $6.2 million, after it had been estimated at $2.3 million.

"This is much rarer," Wahlgren said, explaining that the last time the second authorized quarto edition of "Hamlet" was for sale, in the 1940s, it was Lady Eccles, then known as Mary Hyde, who purchased it.

"People realize they're not going to see this at auction again," Wahlgren said. "This is a unique opportunity."

Lady Eccles, who was among the first women admitted to the bibliophile Grolier Club in New York, was 91 when she died in August. Her Samuel Johnson collection and other books in her collection were pledged to institutions, including Harvard; the remainder is being auctioned Wednesday, with a portion of the proceeds benefiting her many philanthropic interests.

The Second Quarto - so named because the paper was folded four times in the printing process - was first published in 1604. It was the second edition of "Hamlet" printed, but only the first authorized edition.

The work being auctioned was the second edition of Hamlet and third printing overall, and the last edition of "Hamlet" printed while Shakespeare was still alive.

The First Quarto, published in 1603, was apparently printed without Shakespeare's permission and contained errors; a later collection of his works, the First Folio, was published posthumously, in 1623.