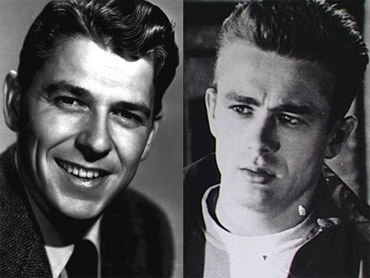 In the mid-20th Century, Ronald Reagan began his transformation from B-movie actor to champion of American conservatism, riding in part a backlash against the cultural rebellion taking place throughout the nation.

With that setting in mind, recently unearthed footage of Reagan paired with his cultural polar opposite, James Dean, the rebel without a cause, is stirring.

Found by Wayne Federman, a writer for NBC's Late Night with Jimmy Fallon, and published on the The Atlantic website, the production, titled "The Dark, Dark Hours," aired Dec. 12, 1954, during an episode of CBS' General Electric Theater.

Read the full article at The Atlantic

Reagan plays a doctor who feels threatened by Dean, a teenage criminal seeking medical help for a friend.