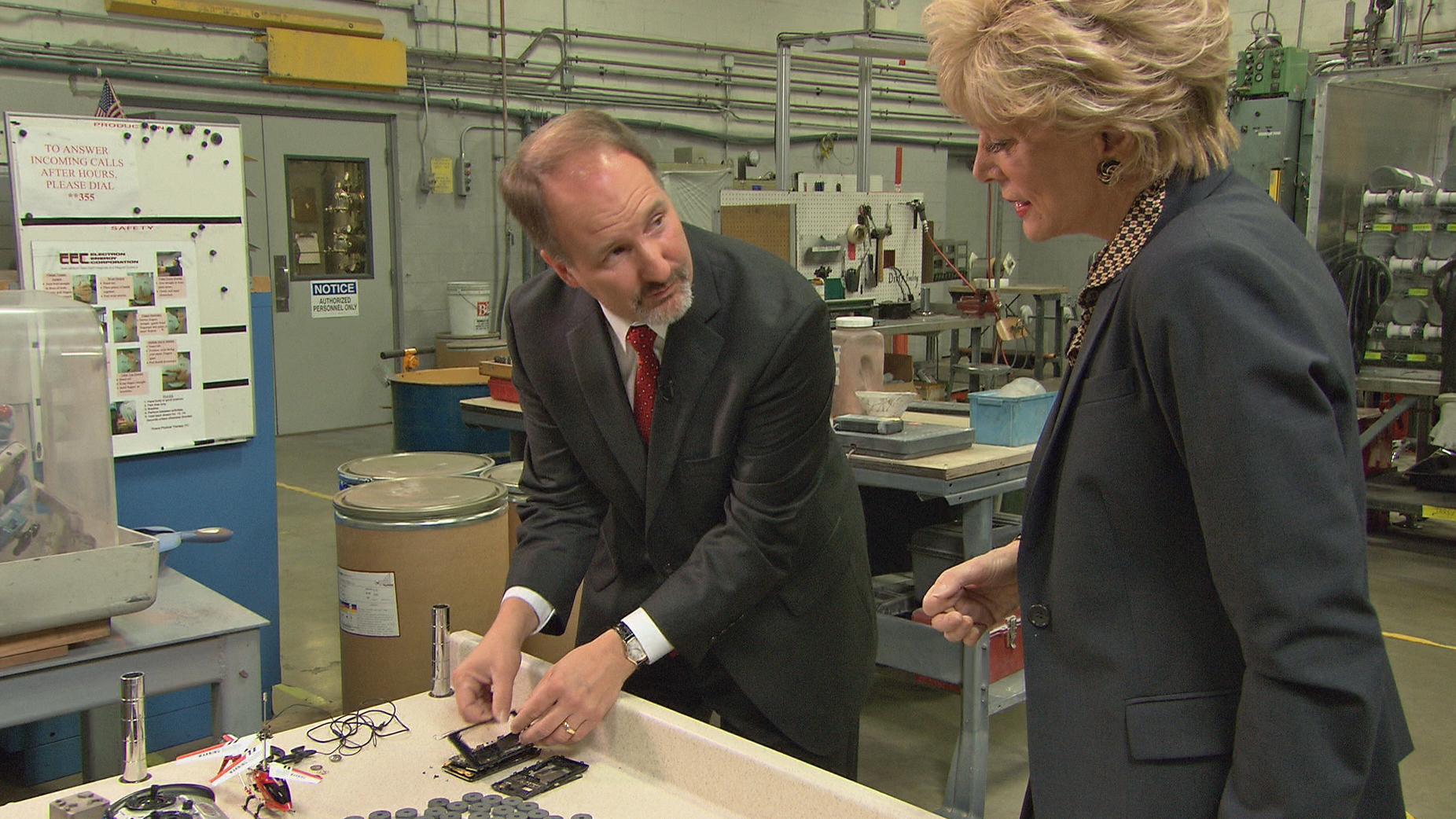 The following is a script from "Rare Earth Elements" which aired on March 22, 2015, and was rebroadcast on July 19, 2015. Lesley Stahl is the correspondent. Graham Messick and Kevin Livelli, producers.

What do cars, precision-guided missiles and the television you're watching right now have in common? They all depend on something called rare earth elements, unusual metals that are sprinkled inside almost every piece of high-tech you can think of. Most people have never heard of them. But we have become so reliant on rare earths that a few years ago, an intense global power struggle broke out over their free flow. The reason is that one country has a virtual monopoly - roughly 90 percent -- of the mining, refining and processing of rare earths -- China. And in 2010, it used that power to disrupt the world's supply. As we first reported last March, it's especially troubling, because it was the United States that started the rare earth revolution in the first place.

It all began here at this mine in Mountain Pass, California, an hour west of Las Vegas, when geologists first identified rare earth elements deep in the Mojave Desert. They were considered geological oddities, until the 60s when it was discovered that one of these elements, "europium," enhanced the color red in TV sets and soon the rare earth industry was born.

Constantine Karayannopoulos: Rare earth chemistry is fascinating. There's so many more things that we could be doing with rare earths.

Constantine Karayannopoulos, chairman of Molycorp, which has owned and operated the Mountain Pass mine for six decades, took us to the heart of the operation.

Lesley Stahl: Is this considered a big mine?

Constantine Karayannopoulos: In terms of rare earth standards, yes. It's one of the biggest in the world.

Lesley Stahl: We are right on it?

Constantine Karayannopoulos: It starts at the top of the mine, then comes down and we're walking on it and it goes in that direction.

So what are rare earth elements? If you ever took high school chemistry you learned that they're clumped together at the end of the periodic table...atomic numbers 57 through 71... and they have difficult-to-pronounce Greek or Scandanavian names.

Some of them are phosphorescent. Erbium amplifies light, and is used in fiber-optic cables. Gadolinium has magnetic properties and is used in MRI machines and X-rays. As for neodymium? You may be carrying some of it in your pocket.

Constantine Karayannopoulos: Next time your phone vibrates, think of us because the vibration motor is a small motor that contains a tiny neodymium magnet in it.

Karayannopoulos showed us around a new model home to illustrate that rare earths are making our appliances energy efficient like state-of-the-art refrigerators, touch screen thermostats, energy efficient light bulbs, the air conditioning systems. They're also in our cars in the form of catalytic converters, sensors and hybrid car batteries.

Constantine Karayannopoulos: Hybrids, in particular use a lot more because they contain electric motors that would not function without rare earths.

A Prius has roughly 25 pounds of rare earths. And they're hidden in plain sight in our every day lives, in our computers and gadgets, even the lights and cameras we used to film this story are chock full of rare earths.

Lesley Stahl: What I'm getting from you is that modern life depends on these elements.

Despite their name - rare earths are not rare. Small amounts can be found in your backyard. They're trapped in what looks like ordinary rock.

But there are only a few places on earth with concentrations high enough to mine.

Constantine Karayannopoulos: Rare earths normally are found in very, very low concentrations. This is probably running something in the 25 percent grade.

Constantine Karayannopoulos: Which is remarkable. To anyone who has ever worked with rare earths, this is a thing of beauty.

But getting the rare earths out of that rock is nasty business requiring toxic acids and lots of water. In fact, the mine was shut down by the state of California in 1998 after radioactive water seeped into the surrounding Mojave Desert from an underground pipe. The mine lay dormant for a decade, giving China an opportunity.

Dan McGroarty: The Chinese made a very conscious decision to enter that industry.

Dan McGroarty was special assistant to President George H.W. Bush and today advises the U.S. government on critical materials. When the Molycorp mine closed, he says China was already well on its way to becoming the king of rare earths.

Dan McGroarty: There's a point at which the lines cross. The United States production declines. Chinese production's ramping up. Those lines cross somewhere around 1986.

Lesley Stahl: So how did they pull it off? What were the factors that allowed them to basically take this away from us?

Dan McGroarty: Well, the advantage of lower labor costs, would be a place to start. Also, environmentally, very, almost no environmental constraints around mining--safety considerations for the miners doing mining, in huge contrast to the United States. So, that translates directly into lower pricing. And lower pricing can push other people out of the market.

The Chinese also had orders from the top. In a little-noticed speech in 1992, Deng Xiaoping signaled China's intention to corner the market.

Lesley Stahl: What exactly did he say?

Dan McGroarty: Actually said that. I think it's fair to say, at that point, people in the rest of the world, who had been saying, 'What are - what is he talking about?'

Dan McGroarty: I think so.

Lesley Stahl: Did we just not foresee what they foresaw?

Dan McGroarty: It's extraordinary if they actually foresaw all the uses. Our designers and developers advanced the miniaturized applications for laptops and cell phones while the Chinese were going after the metals and materials out of which these things are actually built.

Lesley Stahl: How did they get the know-how?

Dan McGroarty: An enormous amount of investment. It's kind of like the Chinese moon shot, the moon program.

China poured billions into the industry, ignoring the consequences. We obtained this video from a freelance cameraman showing the area near Baotou, China's rare earth capital, where the air, land and water are so saturated with chemical toxins, the Chinese have had to relocate entire villages. This is one of the few places where rare earths are turned into metals, which are then alloyed -- or blended -- into things like permanent magnets.

Ed Richardson: These are magnets that once you magnetize them, they stay that way.

Ed Richardson, president of the U.S. Magnetic Materials Association, says the most important use of rare earths is in magnets. Only a small amount can produce magnets able to lift a thousand times their weight.

Ed Richardson: This is a cell phone.

He showed us how miniaturized rare earth magnets can be.

Ed Richardson: So I'm going to take it apart layer by layer and we're going to get to the point where we can actually see the magnets, the rare earth magnets that are inside there.

Ed Richardson: Right. If you put the paperclip you can see how it sticks.

Lesley Stahl: And this little tiny thing is the speaker.

Ed Richardson: Right. This is how devices have gotten small, very powerful, because the magnets are so powerful, you don't have to use much of it.

The U.S. developed this technology, but China bought most of it right out from under us. For instance, in 1995, China bought the biggest American rare earth magnet company, "Magnequench" which was based in Indiana.

Ed Richardson: When they bought the factory, they now had the patents. They now had the equipment. And they actually had some of the Magnequench employees in the United States go to China and teach the people how to make the products.

Lesley Stahl: Did we not understand the strategic importance of keeping that industry here?

Ed Richardson: We didn't get it and unfortunately the technology was transferred to China before that technology was appreciated. And now, we're seeing so many, for instance, defense systems that are dependent on it.

Lesley Stahl: Does that make us dependent on China for our defense systems?

Ed Richardson: Oh, we are very dependent on China.

Lesley Stahl: We are dependent on China for our weaponry.

A prime example of that is the new F-35 fighter jet, the most technologically advanced weapons system in history. Each one contains nearly half a ton of rare earths. Former White House Official Dan McGroarty says that's just for starters.

Dan McGroarty: The guidance systems on weapons system and tomahawk cruise missile, any of the smart bombs have rare earths in them. Lasers. I'd be hard-pressed to name anything that we would consider worth building today and going forward that would not have a rare earth compound in it.

Lesley Stahl: Because of this. Because of the monopoly on rare earths, does China threaten our national security?

What finally woke up the U.S. government was an incident at sea in 2010. A Chinese fishing trawler rammed a Japanese coast guard ship in a territorial dispute.

Dan McGroarty: The Chinese cut them off. And for 30 to 40 days, the rare earths did not flow to Japan. So it was a real shot across the bow for the Japanese that this is something that you have to be worried with.

It was a wake up call. Finally, 20 years after Deng Xiaoping's speech, rare earths were on the U.S. radar screen.

President Obama announced a formal complaint to the World Trade Organization against China for creating shortages for foreign buyers and last August the WTO ruled against Beijing.

No one in the Obama administration would talk to us on camera about rare earths and our dependence on China... including the Department of Energy... the Pentagon... or the U.S. trade representative. Even the private sector didn't want to discuss the problem.

Lesley Stahl: We tried to get interviews with heads of companies that use the magnets and other products coming out of China, and they would not talk to us. Is there fear in high-tech companies that if they say something negative, maybe China won't sell them what they need?

Dan McGroarty: I think that there is grave concern in these companies, but perhaps not a willingness to talk about that on a street corner.

So what is the U.S. doing to restore the industry here? Out in California, Molycorp was allowed to re-open after it developed new technology that protects the environment. But even when it's at full capacity, the mine will only produce a fraction of the world's supply of rare earths.

The Pentagon has begun stockpiling rare earths, and industry is researching new technologies that would replace them.

Lesley Stahl: Do you get any help from the U.S. government? They want to have a rare earth industry here.

The government is not offering incentives like tax breaks or subsidies that would lure businesses into the market.

Lesley Stahl: What needs to change to bring more of the industry back to the United States?

Constantine Karayannopoulos: First of all, we need to take a long-term view. It took 20 years to lose the dominant position-- at least 20 years. And it's probably going to take us 10, 15 years, if we execute, for some of these supply chains to start coming back.

But trouble is once again looming for the U.S. rare earth industry. Since restarting operations two years ago, Molycorp's mountain pass mine has yet to turn a profit, and so deeply in debt, it recently filed for chapter 11 bankruptcy.