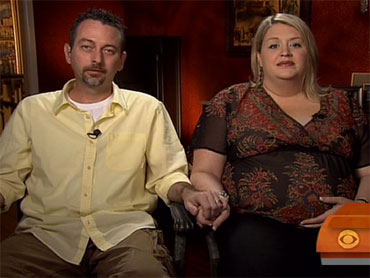 How could a woman be pregnant with two fetuses, but not with twins?

Todd and Julia Grovenburg, of Fort Smith, Arkansas, are expecting two babies, but one might be weeks older than the other.

Some doctors believe it's a rare case of superfetation, a condition common in animals, but rarely seen in humans. In this case, Julia, who was already pregnant, got pregnant again.

The Grovenburgs have been trying to conceive for a couple of years and this May Julia received the great news that she was pregnant.

"We went in for our first appointment and they scheduled for us a sonogram two weeks after, so June 4 was the first," Julia said.

The happy couple saw the second fetus at the first sonogram. Developmentally, the babies are two weeks and four days apart.

Although the Grovenburg's doctor was surprised, he wanted to make sure the second baby was developing right along with the first.

"He came in and his initial reaction was to 'Let's wait and see' and make sure the littler baby catches up to the bigger baby, because it was something so new for him also," she said.

Julia's OB-GYN, Dr. Michael Maylaert, said in a statement that while she is pregnant with twins, "there appears to be a discordant growth pattern, possibly due to superfetation. This is an unusual and rare condition, but the possibility is real." He said it can only be confirmed after delivery by chromosomal and metabolic studies on the babies."

Dr. Maylaert said Julia's condition was evaluated at the University of Arkansas for Medical Sciences in Little Rock, which confirmed the suspicion of superfetation.

"Are you guys convinced it is superfetation?" Smith asked.

"In our hearts, I believe that we both are convinced that it is," Juila said.

"I am definitely," Todd added.

Both babies will be delivered at the same time.

Through aminocentesis (a biopsy of the developing placenta before the thirteenth gestational week), the Grovenburgs could officially find out the exact difference in age between the two babies, but they have decided not go that route.

"It was from my understanding that we could find out from aminocentesis, but like you said, it's unchartered territory, so for me to answer that right now, I think it would be up to another specialist to confirm that," Julia explained.

The Grovenburgs have refused to do aminocentesis because "the babies are healthy," Julia said. "There's such a high risk in doing that and we feel so blessed to have two, we did not want to do it."

From what they can see, both babies are doing fine.

"Absolutely. We've been cleared from the Arkansas Children's Hospital," she added.

Smith wished the couple the best of luck for the "blessed double event."