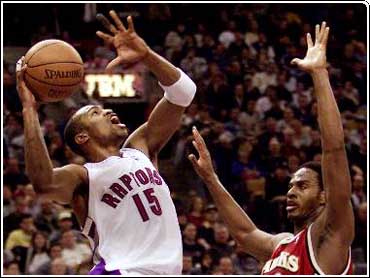 Vince Carter alleviated any fears he might not play in this weekend's All Star game.

One day after cutting open the middle finger of his left hand, Carter scored 36 points and led the Toronto Raptors over Atlanta 109-88 Tuesday night for just their second win in 18 games against the Hawks.

Carter, the leading All-Star vote-getter, hurt the finger while lifting weights Monday. He needed three stitches to close a half-inch cut and played with a Band-Aid.

"I didn't think about it all," Carter said. "It was a little overblown."

Carter scored 12 points in the first quarter and totaled 20 in the first half as Toronto took a 54-48 lead, converting a three-point play after a low blow while attempting to dunk over LaPhonso Ellis in the second quarter.

"He had like two stitches on his finger," teammate Antonio Davis said. "It wasn't that bad."

Toronto began the third quarter on a 19-4 run as Carter scored 10 points, including a 3-pointer that made it 73-52. Carter scored 14 points as Toronto outscored Atlanta 31-14 in the quarter.

"He's a little nervous about the All-Star game," Davis said. "Everybody is putting so much pressure on him and expecting so much from him. I just pray that he just goes out there and has fun. ... You can just tell after practice, he's practicing his dunks and asking everybody about the dunk contest. I just told him, `Hey go have fun. You're young, you can jump out of the gym. Everything you do everybody is going to love anyway so don't worry about it.' "

Isaiah Rider, who sat out the final five minuteof Atlanta's win over Cleveland on Saturday, was benched for the entire fourth quarter. Rider, who scored just 12 points on 5-for-13 shooting, sat alone along the baseline with a towel over his head.

"The frustration level isn't setting in it's already there," coach Lenny Wilkens about his team.