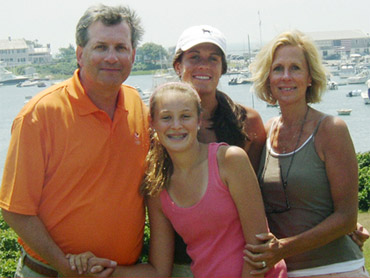 More heart-wrenching testimony has been given in the brutal home invasion trial in Connecticut.

CBS National Correspondent Jeff Glor reported on "The Early Show" from New Haven, Conn., that jurors have now heard the words of the accused himself, and as the details in this case continued to be revealed, the more horrific the crime becomes.

New testimony in the rape and murder of Jennifer, Michaela and Hayley Petit in September 2007 paint a picture of a simple robbery gone horribly wrong.

Detective Anthony Buglione gave a gripping account of a confession given by defendant Steven Hayes. Hayes' recounted how things quickly got "out of control."

CBS News Legal Analyst Lisa Bloom remarked, "This is very powerful testimony because these are the words of the defendant himself as to the savagery that these two imposed on this family."

Hayes said, "The man began screaming and there was blood all over the place."

Petit, the only survivor, spoke outside court.

He told reporters, "It was another tough and painful day for the Hawke and Petit families and I think everybody saw that who listened to the testimony."

But it was the explanation of the rapes that was most chilling. Hayes says he escorted Jennifer Hawke Petit to the bank where she withdrew $15,000, and when they returned Komisarjevsky had already sexually assaulted 11-year-old Michaela.

Hayes says Komisarjevsky told him to "have sex with the mother to square things up."

She was later strangled to death.

Bloom said, "Hayes is trying to point to his codefendant and say he was the bad guy, he was the worst one."

Jurors saw just-released surveillance photos of Hayes purchasing gas that prosecutors say was used to set the house on fire in an attempt to cover their tracks.

Medical examiner Wayne Carver gave graphic testimony, detailing how smoke inhalation took the lives of daughters Hayley and Michaela. He found soot in Michaela's voice box, airways and lungs, showing that it took several minutes for her to die.

When the medical examiner took the stand, William Petit and other family members left the courtroom, the details of his family's deaths were too much for him to take.

The death penalty is being pursued by prosecutors in this case. "Early Show" co-anchor Harry Smith spoke with Ron Bucchi, a family friend of the Petits and treasurer of the Petit Family Foundation, on the broadcast about the family's position on this possible punishment.

Bucchi said sitting in the courtroom with the man accused of these acts is "gut-wrenching."

He said, "The Petit and Hawke famil(ies) are extremely brave and courageous people to go through this. They've showed solidarity between the families and that's been heartwarming. But, the whole case surrounding it -- just awful."

Smith, who attended part of the proceedings, remarked, "People talk about the idea of things like closure or healing. And I'm not sure, after listening to the testimony in a case like this and realizing some of the facts about it, that a notion like that is even possible."

Bucchi agreed. He replied, "I don't think there's -- people have to understand these -- some of the details of the case are coming out right now through the court proceedings, but the Petit and Hawke families have been dealing with this every day for the last three years. And it's going to continue. There will never be, you know, peace with most of us. It's always in our minds and it will always be reoccurring for us."

Bill Petit has been focusing his energy on the Petit Family Foundation, according to Bucchi. The foundation is holding a charity bike ride this weekend.

"(The foundation) has given Bill and the family a sense of purpose and keeping the family and what the girls really believed in how they were always giving individuals. So, it's very good for him."