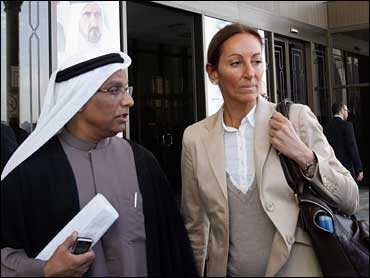 Two Emirati men were sentenced Wednesday to 15 years in prison each in the highly charged case of kidnapping and sexual attack on a French-Swiss teenage boy.

Veronique Robert, the mother of the 15-year-old boy, said that "justice was done," but that she would still appeal, seeking a tougher punishment for the men she said raped her son and put him in danger of contracting HIV.

Neither of the defendants, ages 35 and 18, nor the underage victim, who now lives in Europe, were present in the courtroom Wednesday in Dubai when the three-judge panel read the sentences.

The two men had been charged with "kidnapping with deceit" and "forced homosexual relations," a charge that can be punished with life imprisonment or death, in connection with the July attack on the boy.

The judges did not state specifically what each defendant was convicted of, in line with the confidentiality clauses in Dubai's court system. Their names also can not be made public, under the court system's rules.

The AP is using Robert's name with her agreement, but is not identifying her son.

Robert's son told police the men abducted him and a 16-year-old friend while they were on their way home from a mall in Dubai in July. The three men then drove to the edge of Dubai's desert and threatened the boys with a stick and a knife, then took turns sexually assaulting Robert's son, the boy said.

But the lawyer for the two defendants told the court last month that neither of his clients had sexual intercourse with Robert's son. The defendants' lawyer said Robert's son and his friend both had entered the juvenile defendant's car voluntarily.

The high-profile case has raised questions over the treatment of sex crime victims in this rapidly growing but deeply conservative Gulf city-state, where the legal system is a mix of Islamic laws and tribal rules.

"Justice was done," said Robert, the victim's mother, speaking to The Associated Press on the phone after the verdict was read in Dubai's Court of First Instance.

But Robert - who has been highly critical of Dubai authorities - said she still planned to appeal to try to gain a life sentence for the older defendant, who she contends knew he was HIV positive before the attack.

A journalist, Robert has since the attack set up a Web site calling for pressure on Dubai authorities to take basic steps to protect underage rape victims, such as ensuring they are tested for infectious diseases and get psychological help, immediately after an attack.

Habib al-Mulla, a government spokesman, rejected criticism of the emirate's legal system and defended the length of prison terms for the two defendants.

"The sentences, by any international standards are not lenient," al-Mulla said on CNN Wednesday. "I think the outcome of the whole process is extremely good."

Both the defendants and the victim have 15 days to appeal the verdict to Dubai's court of appeals.

A third defendant, who is under age 18, is being tried in a juvenile court on the same charges and could face up to 10 years imprisonment if convicted. The status of that case has not been made public.

When the case came to light, Robert accused Emirati authorities of lying about the HIV status of the older defendant to cover up the fact that AIDS exists in Dubai. She also accused Dubai authorities of lacking sensitivity in their handling of her son after the attack, accusing him of homosexual behavior and of fabricating the attack.

"He (the older defendant) said to the prosecutors that he was HIV positive," Robert said Wednesday on the phone after she left the courtroom. "He knew that he might have planted death into my son, and for that he is a criminal who deserves to be in jail for life."

Robert has been in Dubai following the court sessions. Her son, a former student in Dubai, left the Emirates in early October because French diplomats told Robert that he might be prosecuted for homosexual acts, a crime here.

But after authorities said he would not be charged, the boy returned briefly to testify in court Nov. 7. His testimony was closed to the public.