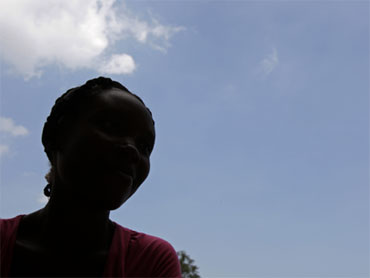 When the young woman needed to use the toilet, she went out into the darkened tent camp and was attacked by three men.

"They grabbed me, put their hands over my mouth and then the three of them took turns," the slender 21-year-old said, wriggling with discomfort as she nursed her baby girl, born three days before Haiti's devastating quake.

"I am so ashamed. We're scared people will find out and shun us," said the woman, who suffers from abdominal pain and itching, likely from an infection contracted during the attack.

Women and children as young as 2, already traumatized by the loss of homes and loved ones in the Jan. 12 catastrophe, are now falling victim to rapists in the sprawling tent cities that have become home to hundreds of thousands of people.

With no lighting and no security, they are menacing places after sunset. Sexual assaults are daily occurrences in the biggest camps, aid workers say - and most attacks go unreported because of the shame, social stigma and fear of reprisals from attackers.

The lack of security even places foreigners in Haiti at greater risk. The U.S. State Department expanded its travel warning for Haiti on Monday to say that dangers of killings and kidnappings persist, and "some kidnap victims have been killed, shot, sexually assaulted or physically abused."

U.S. Embassy spokeswoman Mari Tolliver said a kidnapped person was among four U.S. citizens killed in Haiti since the earthquake.

"One of the deceased American citizens was the victim of a kidnapping," said Tolliver, giving no further details.

Rape was a big problem in Haiti even before the earthquake and frequently was used as a political weapon in times of upheaval. Both times the first democratically elected president, Jean-Bertrand Aristide, was ousted, his enemies assassinated his male supporters and raped their wives and daughters.

But the quake that killed an estimated 200,000 people has made women and girls ever more vulnerable. They have lost their homes and are forced to sleep in flimsy tents or tarp-covered lean-tos. They've lost male protection with the deaths of husbands, brothers and sons. And they are living in close quarters with strangers.

The 21-year-old said her family has received no food aid because the Haitian men handing out coupons for food distribution demand sexual favors.

Sex-for-food is not uncommon in the camps, said a report issued Tuesday by the Interuniversity Institute for Research and Development in Haiti. "In particular, young girls have to negotiate sexually in order to get shelter from the rains and access to food aid."

At the camp on Monday where the young mother was gang-raped, a woman in shorts tried to bathe discreetly. Stripped to her waist, she faced her blue tarp tent, her back to the rows of other shelters.

Nearby, a teenage girl squatted behind a pile of garbage, trying to avoid the stench and clouds of flies around tarp-covered latrines that provide the only privacy, but also are places where women are attacked.

In this camp, some 47,000 people live crowded into what used to be a sports ground in a neighborhood that always has been dangerous. Residents include a dozen escaped prisoners, among them a man accused of a notorious murder, according to Fritznel Pierre, a human rights advocate who lives at the camp.

Pierre has documented three other gang rapes in the camp, including of a 17-year-old who says she was a virgin before six men attacked her and raped her repeatedly.

"I really worry about the teenager because she has no one to look out for her. She says she sees her attackers but is afraid to report them because she would then have to leave the camp and she has nowhere to go," Pierre said.

Only a week later did U.N. police officers begin patrolling.

"For me it seems completely bizarre that for this one camp that everyone knows is unsafe, it's taken them three weeks to get a patrol going," said Liesl Gerntholtz, executive director of the agency's women's rights division. "It's unrealistic to expect patrols in camps all the time, but I think they can identify hotspots and provide security to those spots."

Pierre complained that the U.N. patrols are ineffective. "They only drive their cars down the one road that covers only a small portion of the camp. They never get out of their cars," he said.

In the hilltop suburb of Petionville, where plush mansions look out over slums on hillsides and in ravines, a 7-year-old rape victim was being treated Monday in the hospital of a tent camp set up on a golf course. Another child, a 2-year-old, had been raped in the same camp two weeks earlier.

The toddler is taking antibiotics for a gonorrhea infection of the mouth, according to Alison Thompson, who is the volunteer medical coordinator for a Haitian relief group created by Sean Penn. She helped treat both children.

"Women aren't being protected," Thompson said. "So when the lights go down is when the rapes increase, and it's happening daily in all the camps in Port-au-Prince."

Besides sexually transmitted diseases and pregnancy, victims face possible HIV infection. Haiti has the highest infection rate for the virus that causes AIDS in the Western hemisphere, with one in 50 people infected.
Among the many rape victims is an 18-year-old girl who lost her parents, grandmother, a sister and three cousins to the quake. She was roaming the streets distraught when a man approached her, promising her his wife would look after her, she said.

The middle-aged man took her to a house, then left and came back with two men. The three raped her repeatedly until she managed to escape.

The teen is among dozens of rape victims who have sought help from KOFAVIV, a group of Haitian women who survived political rapes in 2004. Their offices were destroyed in the quake and they now operate from a tent.

They brought the victims to American volunteer lawyers who came to Port-au-Prince a week ago to identify Haitians who may qualify for humanitarian parole to live in the United States.

"I've been here five days and have spoken to 30 (rape) survivors including a dozen under 18. Their stories are horrific. I would be catatonic," said San Francisco lawyer Jayne Fleming.

Few rapes are reported because women often face humiliating scrutiny from police officers who suggest they invited the attacks and even nurses who contend young girls were "too hot" in their dress style, according to Delva Marie Eramithe, a KOFAVIV leader.

Her own 18-year-old daughter was saved from an attacker who dragged the girl into a dark alley between tents at the downtown camp sprawling across Champs de Mars plaza. The assailant did not see the teen's three sisters, who had been walking behind her, and all four of them managed to beat him and run him off.

Soon after, he returned to their tent with three other men and a gun, Eramithe said.

While a male neighbor argued with the men, Eramithe and her daughters went to a nearby police station to report the attempted rape.

"We told them the man who attacked her was right there at our tent, just two blocks away," Eramithe said. "But one policeman said they had received reports of nothing but raping, thefts and domestic beatings all day and there's nothing they can do. The other police officer said the only person who can do anything is President (Rene) Preval."

When she insisted, they gave her the license plate of a police van patrolling the camp perimeter. Eventually she found the patrol car but that officer "told us to go and get the attacker and bring him to them."

Police spokesman Gary Desrosiers said only 24 rapes have been reported to Haitian authorities this year. Several suspects were detained, but many escaped when prisons collapsed in the quake, he said.

Police Chief Mario Andresol blamed the attacks on the more than 7,000 prisoners who escaped. "Bandits are taking advantage to harass and rape women and young girls under the tents," he told reporters two weeks after the quake.

"We are aware of problem ... but it's not a priority," Information Minister Marie-Laurence Jocelyn Lassegue said last month.

Haitian police officers with stations minutes from some of the largest camps do not patrol - a fact that spokesman Desrosiers blames on the loss of dozens of officers killed in the quake, as well as scores who remain missing and more than 250 who were injured.

The first signs of action came when U.N. Secretary-General Ban Ki-moon arrived Sunday, and a contingent of female U.N. and Haitian police officers set up a tent at the camp.

Ban promised the camps will be "safe and secure."

He praised the security offered by Haitian and U.N. police and told the women officers: "We must protect these women and girls. ... If they are sexually abused and attacked and raped, that is totally unacceptable and intolerable, and we must stop it."

On Monday, a man with a bullhorn was at the camp during a food distribution, saying "We don't want men raping women, do we?"

No, the women waiting in line yelled back.

Still, the fear was palpable among the most vulnerable. The 18-year-old orphaned rape victim was nervous about the time, even though it was only mid-afternoon.

"I have to find somewhere to sleep, near some people who might help me if there's trouble," she said.

"It scares me, the way the men look at me, and they know I'm all alone."