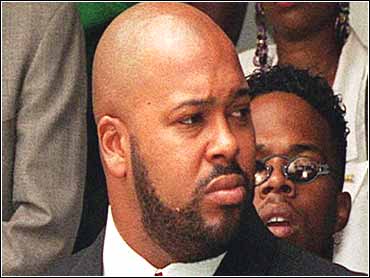 The 36-year-old was released Monday morning and boarded a plane for Los Angeles. He served more than half of a nine-year term for violating probation on assault charges from a fight at a Las Vegas hotel in September 1996. Hours after the fight, rap star Tupac Shakur was killed in a drive-by shooting as he rode in Knight's car.

Knight told the Los Angeles Times he's relieved to be out of prison and looks forward to returning to work at Death Row Records.

"I'm stress-free," Knight told the newspaper. "I want to try to do better things. Watch me. I'm going to the studio tonight."

After arriving in Los Angeles, Knight returned to his company's headquarters near Beverly Hills. A huge billboard above the label's office greeted him with the words "Welcome Home Suge."

Despite losing some of the biggest stars on his label, including Dr. Dre and Snoop Dogg, Knight has signed a new group of unknown acts.

"Better days is coming, man," Knight said. "It's like we're getting ready for the Super Bowl. We going to start having some fun again."

Knight was paroled on April 20 from Mule Creek State Prison in Ione, Calif., and then transferred to a federal prison in Sheridan, Ore., to finish the remaining months of his sentence.

He was on probation for state and federal charges when he was sentenced to nine years in prison for violating his probation by taking part in the Las Vegas fight.

Knight had been placed on state probation since 1995, when he entered no-contest pleas to two counts of assault after a 1992 attack on two rappers at a Hollywood recording studio.

He also pleaded guilty in 1995 to federal charges of attempting to commit a drug-related offense and conspiracy. He was sentenced to a month in jail and three years supervised release.