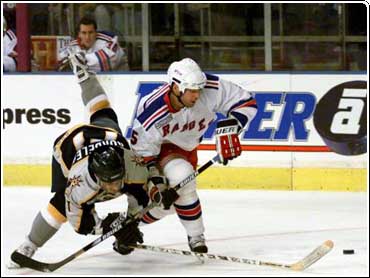 Defenseman Stephane Quintal, who had requested to be traded four months ago, Saturday was suspended by the New York Rangers for the final four games of the season.

The Rangers said the suspension was "for conduct deemed detrimental to the hockey club."

On Friday, Quintal was quoted in a French language newspaper as having requested a trade back to Montreal and saying that Petr Nedved was not a No. 1-calibre center.

He later told the (New York) Daily News that he had requested the trade in November because he no longer wanted to play for coach John Muckler - since fired. But he denied having made disparaging remarks about Nedved.

The newspaper said that Quintal met with interim coach John Tortorella on Friday and was to meet with assistant general manager Don Maloney at night.

Quintal played for the Canadiens for four seasons, starting in 1995. Before that, he played for Boston, St. Louis and Winnipeg.

The Rangers signed him as a free agent last July 6. This season, he had two goals and 14 assists in 75 games.

Giants Stadium To Have Grass

Was It Suicide Or Murder?