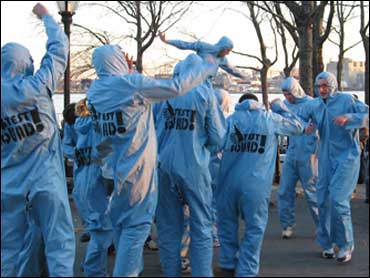 Ivan Rodriguez saved the Texas Rangers at the plate. His work behind it was pretty good, too.

Rodriguez hit a three-run homer Saturday as the Rangers rallied for four runs in the sixth inning to beat the Chicago White Sox 5-3. Every Ranger batted in the inning, and all but three got a hit.

"(The ball) is flying pretty good here," said Rodriguez, who also homered Friday in the first game of a doubleheader. "I hit that one pretty good today."

After a rough first inning, Aaron Sele (16-10) settled down and continued his domination of the White Sox. Chicago scored three runs and got five hits off Sele in the first two innings, but he gave up just one more hit and two walks in his final six innings. John Wetteland pitched the ninth for his 38th save.

Sele said much of the credit should go to Rodriguez. His catcher called for a mix of pitches that the White Sox never quite figured out.

"I was able to keep the hitters off stride," said Sele, who is 4-0 against the White Sox this season. "(Rodriguez) did a great job out there."

Mike Sirotka (12-13) was shelled for 10 hits and five runs -- all earned -- in 5 2/3 innings. The White Sox lost despite getting three straight RBI doubles in the first inning from Frank Thomas, Albert Belle and Robin Ventura.

"There were only two hard-hit balls all day. When the ball's hit softly, you need to make the out," Sirotka said. "(Sele) had all the plays made for him. When you give the other team extra ous, it's tough to win."

With the Rangers trailing 3-1 in the sixth, Mark McLemore started the Texas slugfest with a leadoff single. He moved to second on Rusty Greer's single and scored on Juan Gonzalez's single, which increased his major league-leading RBI total to 136.

With Gonzalez on second and Will Clark on first, Rodriguez sent a 1-2 pitch over the left-field wall. It was his 14th homer of the year and gave him 72 RBI.

Sirotka finally got out of the inning when Royce Clayton flew out to center field.

"We started talking in the dugout about one guy at a time getting on base. Then Pudge had an incredible at-bat," manager Johnny Oates said. "It was one of those streaks. We just got one of those streaks where not only did we hit some balls well, they weren't at anybody."

The sixth inning also featured the most bizarre play of the day when Greer tried to score from second on Clark's single. Greer slid hard near home plate and Chad Kreuter seemed to brush him, but home-plate umpire Gary Cederstrom didn't make any call.

As Greer lay in the dirt behind the plate, Kreuter looked at Cederstrom, then jumped up, rushed over and tagged Greer out.

"He never got to the plate," said Oates, who went out to talk to Cederstrom about the play.

Texas got its other run in the third inning on Kelly's RBI single.

The White Sox scored three runs in the first. Mike Caruso reached first on an error when Sele bobbled an easy exchange from Clark near first base. That brought up Thomas, who hit the first of Chicago's three straight RBI doubles. Caruso scored on Thomas' double, Thomas scored on Belle's and Belle scored on Ventura's.

The Sox almost made it 4-0, but Ventura couldn't beat out Greer's throw to Rodriguez at home plate. Chicago got just two more hits the rest of the game.

"I knew if I could hold them (after the first), our team could get us some runs," Sele said. "I settled down and really let the defense work for me."