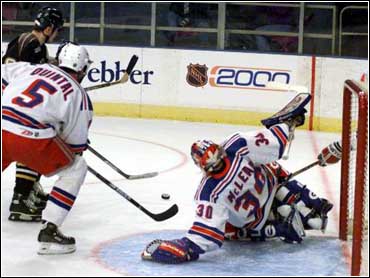 The New York Rangers got a much-needed victory without their All-Star and handed a tough loss to the Pittsburgh Penguins, who were missing theirs as well.

Goalie Mike Richter sat out his second straight game with a knee injury, but Radek Dvorak and Jan Hlavac provided the offense with a goal and an assist each Tuesday night as the Rangers held on for a 4-3 victory over the Penguins, playing without injured winger Jaromir Jagr.

Jagr, the NHL's leading scorer, was sent back to Pittsburgh earlier Tuesday and is out indefinitely after hurting his hamstring in Monday's loss at Tampa Bay.

The win pushed the Rangers back into eighth place in the Eastern Conference, one point ahead of the idle Buffalo Sabres, and one behind seventh-place Pittsburgh with 20 games left.

"Tonight was a must game," coach John Muckler said. "We had to win that game."

Richter missed his fifth game since the All-Star break, but expects to play Friday night at Buffalo. The Rangers, who snapped a three-game losing streak, earned their first victory in six contests (1-4-1).

"We need points," said Brian Leetch, who scored the goal that gave the Rangers a 4-2 lead. "We had three games in a row here where we didn't pick up any points."

Dvorak's 15th goal, scored midway through the second period off a nice feed from Hlavac, put New York up 3-0 before Pittsburgh began its comeback.

The Penguins didn't blame Jagr's absence for the loss.

"Jagr didn't give up three oals," Alexei Kovalev said. "We were not sharp in the first period."

Robert Lang scored late in the second and Pat Falloon added a goal just over a minute into the third to make it 3-2.

After Leetch scored on the power play with 13:04 left, Tyler Wright got Pittsburgh back within one with his seventh at 11:28. Without their top offensive threat, the Penguins couldn't tie it.

"Obviously he's our best player, but we have to rally," Wright said.

It was at that point that Leetch said New York picked its game up.

"When it was 4-2, we started turning the puck over in the neutral zone," Leetch said. "We stopped moving our feet so we could not get the red line and they turned it right back and got that goal."

"When you start playing on your heels is when you get into trouble," McLean said. "We probably played a little better in the third period, but we got a timely goal by Brian and that won us the game."

The Rangers were 2-for-3 on the power play after failing in all six attempts in two previous games against Pittsburgh.

The four points by Dvorak and Hlavac gave the Czechmates line centered by Petr Nedved 30 goals and 39 assists since being formed on Jan. 5.

"We try to score every game," said Dvorak, who completed the trio after being acquired Dec. 30. "Every game is very important to us."

The Rangers grabbed a 1-0 lead on a first-period power play. Nedved forced defenseman Jiri Slegr to turn the puck over along the left boards. Dvorak moved the puck to Hlavac, who fired it in at 2:34 for his 15th.

MacLean scored his 16th goal, and first in 12 games, to give New York a two-goal lead at 10:41. McLean started the play with a nice lead pass to Valeri Kamensky, who set up MacLean.

Hlavac slid a beautiful pass to Dvorak at the left side of the net and easily steered it in at 8:40.

Falloon made it 3-2 with his seventh goal just 1:17 into the third.

Throughout the game, the 20th anniversary of the 1980 U.S. Olympic hockey team's victory over the Soviet Union was celebrated. Seveal team members were in attendance as well as Penguins coach Herb Brooks, who was the leader of the "Miracle On Ice" squad.