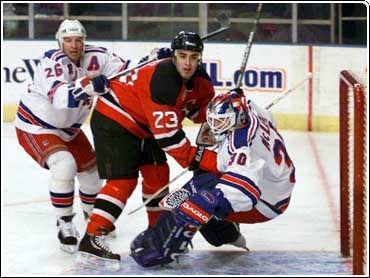 The beat goes on for the New Jersey Devils.

The Devils tied New York 2-2 on Tuesday night, extending their unbeaten streak against the Rangers to 18 games.

"It's a lot of fun," said Gomez, who has four goals and three assists in four games against New York. "It's the Rangers-Devils. Being in games like this is what hockey's all about."

New York's Mike York tied it at 2 with his 18th goal, tops among NHL rookies, on a power play with 7:06 gone in the third.

Valeri Kamensky tipped the puck past defenseman Ken Daneyko at the blue line and skated in on Martin Brodeur. The Devils goalie swept the puck off Kamensky's stick, but it came right to a streaking York, who knocked it in.

"Val made a great play," said York, who teamed with Gomez last season on the U.S. junior team. "Those are the kind you love to get just go to the net. The puck was just laying there and I just slapped at it and it went in."

Gomez, one of two rookies in Sunday's All-Star game, scored his 14th goal with 3:27 left in the second period to tie it at 1, and set up Sergei Nemchinov's goal 2:02 later.

The Devils killed a four-minute power play midway through the third period without allowing a shot, and Brodeur protected the tie with two great saves in the final 25 seconds of regulation. Brodeur stopped 33 shots, including all 17 in the first the most New Jersey has allowed in onperiod this season.

"We did create the chances, the last one with not too much time left," Rangers center Petr Nedved said. "We created the opportunity and he made a great save."

With 8:14 left in the third, Gomez hit New York defenseman Kim Johnsson near the left eye with a high stick and drew a four-minute penalty. Johnsson did not return.

New Jersey coach Robbie Ftorek screamed at referee Don Van Massenhoven to even up the call, but he did not.

"It was a follow through on a shot and that's not a penalty," Ftorek said.

Upon hearing the penalty announced, Randy McKay slammed his stick to the ice. Van Massenhoven, working without a second referee, said he didn't see the play and asked the linesmen for help.

"Even before we could assess anything, we have to determine whether the player was injured or not," Van Massenhoven said. "His eye was swollen shut. He was clearly struck in the face."

The Devils nearly scored during the double minor when John Madden, who leads the NHL with four short-handed goals, hit the post with 4:32 left in regulation.

New Jersey held the Rangers to 1-for-7 with the man-advantage.

"I think we got anxious," Rangers coach John Muckler said of the long power play. "I don't think we were under control of our emotions. We wanted to win so badly, I think we were pressing."

The Rangers played without their only All-Star, goalie Mike Richter, but Kirk McLean did a fine job in his place. McLean, who saw action in only two of the Rangers' previous 30 games, made 29 saves.

"The coaches keep me busy and try to keep me as sharp as they can," McLean said. "It's up to me as a professional to do that."

New York was also without left wing and acting captain Adam Graves, who missed the game after his son Jaxon died earlier Tuesday. Jaxon was born prematurely on Jan. 14 along with brother Logan.

Theo Fleury, who later sustained a back injury, gave the Rangers a 1-0 lead in the second period just 20 seconds after a power play.

York carried in on left wing and dumped it down low to the left of Brodeur. Kamensky picked up the puck and made a back pass to Fleury, who snapped a shot between Brodeur's legs at 12:34 for his 13th goal.

Nearly four minutes later, the Devils tied it. Lyle Odelein's point shot bounced off defenseman Mathieu Schneider and McLean, but Gomez swept it in for his 14th goal.

Gomez, who assisted on the goal, had a hat trick in his first Madison Square Garden game Dec. 26.

The teams meet for the fifth and final time Wednesday night at New Jersey. The Devils are 2-0-2 this season against the Rangers.