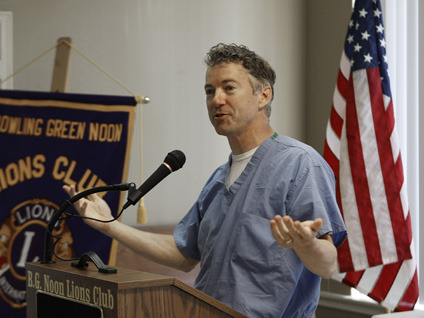 Over the weekend, the Courier-Journal in Louisville reported that Dr. Rand Paul, the Republican Senate nominee in Kentucky, is not a "board-certified" ophthalmologist according to the national clearinghouse for such certifications.

Now Paul is explaining his decision to let his recognized certification lapse as resulting from "the kind of hypocritical power play that I despise and have always fought against."

First some background: Paul's claim that he is a "board-certified" ophthalmologist is tied to his certification by the National Board of Ophthalmology.

Yet that's a group that Paul himself founded in 1999; he also serves as its head.

The organization that works with the American Medical Association to approve specialty boards of this nature, as the Courier-Journal notes, is called the American Board of Medical Specialties. And it does not recognize Paul's group.

The candidate declined to comment to the Courier-Journal about the situation for its story. Asked when he would address the issue, he replied, "Uh, you know, never...What does this have to do with our election?"

But Paul did release a statement today, which is posted in full on Ben Smith's blog at Politico. In it, Paul says he formed his board out of frustration that the American Board of Ophthalmology forced doctors certified after 1992 to be recertified every decade.