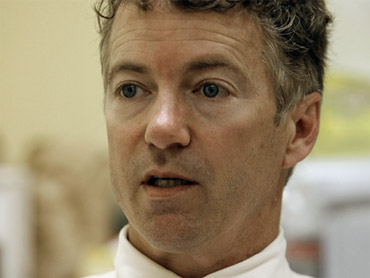 A new article profiling Kentucky Republican Senate candidate Rand Paul's college days alleges that Paul and a friend once kidnapped a classmate and tried to force her to smoke marijuana.

The GQ Magazine article, written by Jason Zengerle, contends that Paul has cast himself as an outsider since his days at Baylor University in Texas, joining a "secret society" called the NoZe Brotherhood. The society was "a refuge for atypical Baylor students" and enjoyed needling the school's administration and its piousness, according to Zengerle.

The author relates an anecdote about Paul and another alleged member of the NoZe Brotherhood, shared by an unnamed woman who was reportedly a classmate of Paul's:

According to this woman, who requested anonymity because of her current job as a clinical psychologist, "He and Randy came to my house, they knocked on my door, and then they blindfolded me, tied me up, and put me in their car. They took me to their apartment and tried to force me to take bong hits. They'd been smoking pot." After the woman refused to smoke with them, Paul and his friend put her back in their car and drove to the countryside outside of Waco, where they stopped near a creek. "They told me their god was 'Aqua Buddha' and that I needed to bow down and worship him," the woman recalls. "They blindfolded me and made me bow down to 'Aqua Buddha' in the creek. I had to say, 'I worship you Aqua Buddha, I worship you.'

When Zengerle asked Paul campaign manager Jesse Benton about the incident, he replied: "During his time at Baylor, Dr. Paul competed on the swim team and was an active member of Young Conservatives of Texas."

Benton tells Slate, "We are investigating all our options -- including legal ones. We will not tolerate drive-by journalism by a writer with a leftist agenda."

Update Aug. 10, 6 p.m. ET: Paul denied the allegations in the GQ magazine article in an interview with Fox News.

"I think I would remember if I kidnapped someone, and I don't remember. And I absolutely deny kidnapping anyone ever," he said, according  to Taegan Goddard's Political Wire.