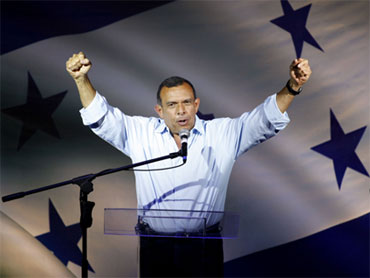 Conservative rancher Porfirio Lobo won Honduras' presidential elections Sunday in voting that many Hondurans hope will end a crippling crisis and others fear will whitewash the overthrow of a leftist leader in a June coup.

Preliminary official results showed the opposition National Party candidate with 56 percent support with more than 60 percent of the vote tally sheets counted. His main rival, Elvin Santos of the ruling Liberal Party, conceded defeat, saying it is time for "unity, the only path to confront the future and ensure the victory of all Hondurans."

Perhaps more importantly, election officials said more than 60 percent of registered voters cast ballots - a victory for interim leaders who hoped a large turnout would bolster the vote's legitimacy in the eyes of the world.

But Manuel Zelaya, the president ousted in the June 28 coup, is certain to challenge that number. He said earlier that his own information from polling stations indicated abstention was as high as 65 percent, insisting the vote had no legitimacy and should not be recognized. No pro-Zelaya presidential candidate ran Sunday.

The candidates' campaigns have been overshadowed by the debate over whether Hondurans should vote at all in an election largely shunned by international monitors.

The United States, hoping to resolve its first major policy test in Latin America, is defending the election, while leftist governments argue it means Central America's first coup in 20 years has succeeded.

Washington's support matters most in Honduras, which sends more than 60 percent of its exports to the United States, from bananas to Fruit-of-the-Loom underwear, and relies heavily on money sent home from the 1 million Hondurans who live in the U.S.

President Obama's government suspended development aid and anti-narcotic cooperation with Honduras over the coup. But U.S. diplomats say Hondurans have the right to choose their next leader in regular elections that were scheduled well before President Manuel Zelaya's ouster. Neither Zelaya nor the man who replaced him - interim President Roberto Micheletti - ran in Sunday's election.

Zelaya had said overwhelming abstention would discredit the election and the U.S. would regret its stance.

"The United States made a mistake," Zelaya said in a telephone interview with The Associated Press from the Brazilian Embassy where he took refuge since sneaking back into the country from his forced exile. "If they are democrats in their country, they should be democrats in Latin America."

After polls closed, he claimed in a statement that he had information from 1,400 polling stations indicating that abstention was as high as 65 percent.

"As president of Honduras I declare this process illegitimate," he said.

Election workers in the slums of Tegucigalpa said turnout was slow, with some saying only about a third of registered voters had arrived by mid-afternoon. But turnout was higher in affluent neighborhoods where resentment against Zelaya runs highest.

Police fired tear gas at several hundred pro-Zelaya protesters in the northern city of San Pedro Sula, and at least one person was injured and required stitches on his head. Some protesters sat down as police approached, and others hurled rocks back at police. Police spokesman Orlin Cerrato said protests are banned on election day.

Zelaya has support among many poor Hondurans who believed in his promises to shake-up a political system dominated by two political parties with few ideological differences and influenced by a few wealthy families.

Mauro Romero, 59, had no intention of setting foot in a polling station.

"Zelaya is the president that we elected. We don't want the same dinosaurs in power, people who have been there for 30 years, only getting fat," said Romero, sitting on the steps of the Tegucigalpa's peach-colored 18th century cathedral, now covered in graffiti saying "No to the coup!"

But many Hondurans simply want to end a crisis that has eroded an already stagnant economy. Tourists have disappeared from Mayan ruins and rain forests, multilateral lending agencies have blocked the country's access to credit.

Opponents say Zelaya's efforts to change the constitution were a ploy to extend time in power by eliminating presidential term limits, as his ally Hugo Chavez has done in Venezuela.

"We don't want a monarch here who is going to stay here forever in this country," said Rolando Barahona, a business manager. "The crisis is behind us and now we all need to unite and work."

Human rights activists accuse the interim government harassing groups promoting abstention. On Saturday, about 50 masked soldiers and police raided the offices of Red Comal, a farm aid group in the northern town of Siguatepeque that has opposed the coup, said Miguel Alonso, the program director. He said police seized computers and documents.

"It's no secret that we are members of the national resistance movement against the coup," Alonso said. "So the raid order doesn't surprise us."

Lobo, 61, and Santos, 46, promise to encourage private investment to create jobs while increasing social benefits in a country where 70 percent of the 7 million people are poor.

Lobo has benefited from divisions within Santos' Liberal Party, which largely turned against Zelaya and supported his ouster.

As president, Lobo says he will talk with Zelaya and has suggested the deposed leader may be allowed to leave the Brazilian Embassy without fear of arrest. Zelaya faces abuse of power charges for ignoring a Supreme Court order to cancel a referendum on changing the constitution.

Under a U.S.-brokered pact, Congress is set to decide Wednesday whether Zelaya should return as head of a unity government until his constitutional term ends Jan. 27. Despite its support of the elections, the United States insists it still supports Zelaya's reinstatement.