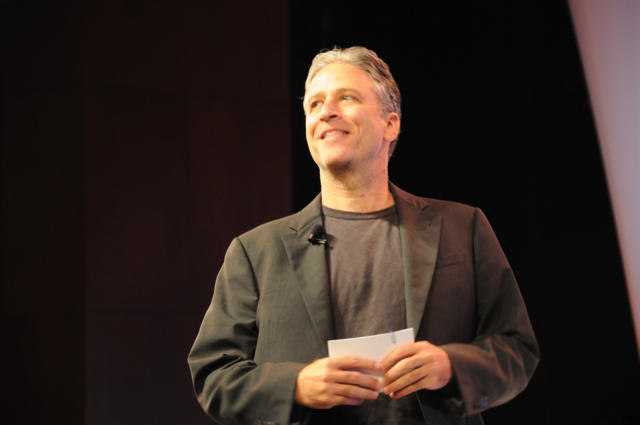 Jon Stewart's decision to hold a "Rally to Restore Sanity" in Washington DC on October 30th - just a few days before the midterm elections - exists, like many things Jon Stewart-related, in the uneasy space between comedy and sincerity.

Stewart has always insisted his show is only about the former, despite evidence that his ambitions are far larger than that; check out his takedown of CNN's "Crossfire" on that now-canceled program if you have any doubts. And while the inclusion of Stephen Colbert and his "March to Keep Fear Alive" on October 30th shades things slightly more toward the comedic, Stewart made clear in announcing the event last night that his message was anything but a joke.

The essence of Stewart's message in the "Rally to Restore Sanity" - that Americans needs to "take it down a notch for America" - can be seen in that memorable Crossfire appearance back in 2006. "Why do we have to fight, the two of you?" Stewart said to the hosts, Tucker Carlson and Paul Begala, around whose partisan arguments the show was built.

Accusing the hosts of "partisan hackery," Stewart said they were "hurting America" and called on them to "stop."

"You have a responsibility to the public discourse, and you fail miserably," Stewart said, complaining of the show's "knee-jerk, reactionary" tone.

Indeed, that was the essence of Stewart's message in announcing the event on his show Thursday night - both the left and the right need to dial down the rhetoric (and stop calling everyone Hitler). While it remains to be seen how many people will show up at the rally, he does seem to have identified some public space that most people forgot about in the era of 24-hour news networks - the wide space between Ann Coulter and Michael Moore, the space that most Americans occupy even though you don't see them on TV.

Conservatives will be quick to complain that Stewart is not a perfect fit for such a message - and indeed, it's hard to imagine that a lot of those who show up at the rally will be voting Republican. But Stewart would counter that such thinking misses the point - the march, much like Glenn Beck's "Restoring Honor" rally, is meant to be about something other than politics.

In fact, Beck's rally and Stewart's aren't all that different from that perspective, even if it's hard to imagine the person who would attend both of them: Both are designed to move away from a discourse grounded in "crossfire" and toward something less divisive. For Beck, that something else was God; for Stewart, it appears to be, essentially, reasonableness.

"We're looking for the people who think shouting is annoying, counterproductive, and terrible for your throat," the site for the Rally to Restore Sanity reads. It goes on to make an appeal to the sorts of Americans who've never taken a position extreme enough to earn a place arguing on CNN.

"Ask the sitter if she can stay a few extra hours, just this once," the site reads. "We'll make it worth your while."