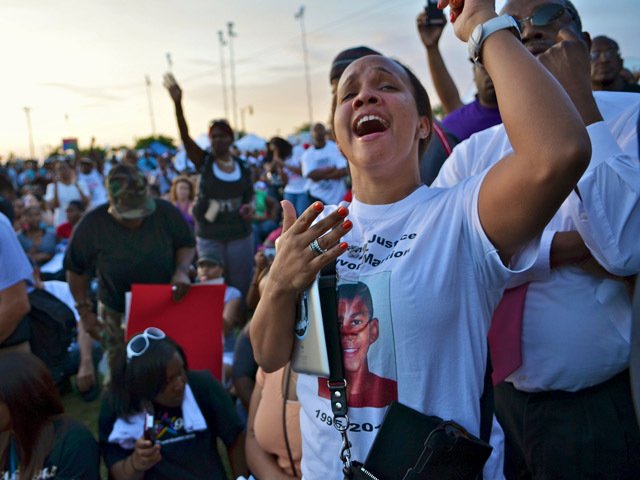 (AP) SANFORD, Fla. - One sentiment was clear among the thousands who rallied Thursday night for action in last month's fatal shooting of an unarmed Florida teenager: justice.

"We cannot allow a precedent when a man can just kill one of us ... and then walk out with the murder weapon," Sharpton said, flanked by Martin's parents and a stage full of supporters. "We don't want good enough. We want George Zimmerman in court with handcuffs behind his back."

The rally came the same day that bitterly criticized Police Chief Bill Lee stepped down temporarily, he said to help quell the rising passions surrounding the case. Hours later, Gov. Rick Scott announced that the county prosecutor also had recused himself from the case and that a state attorney from Jacksonville would take over the investigation.

Sharpton attended the rally just hours after the death of his mother. "This is where she would want me to be," he said.

He was joined by Martin's parents, Martin Luther King III and nationally syndicated radio host Michael Baisden whose encouragement to his Twitter followers helped escalate attention on the shooting.

Trayvon Martin lived in Miami and was in Sanford visiting family Feb. 26 when he went to a convenience store. He was walking back carrying a bag of Skittles candy and can of iced tea, the hood of his jacket pulled over his head because it was raining. He was approached by the 28-year-old Zimmerman, who told a police dispatcher he thought Martin looked suspicious. Zimmerman shot Martin following a chase and fight.

Zimmerman says he shot Martin in self-defense, and Sanford police officials say there is no evidence that contradicts that. Some neighbors in the gated community have praised Zimmerman for taking a stand against crime in the neighborhood that is 57 percent white and 30 percent black. Police say Zimmerman is white; his family says he's Hispanic.

Martin's parents, Tracy Martin and Sybrina Fulton, believe Zimmerman should have been arrested. They claim he was profiling their son and acted like a vigilante.

The rally was initially planned for a 400-seat church. But it was moved to downtown to make room for all the people who stood shoulder-to-shoulder in Fort Mellon Park, many holding signs with everything from "Justice For Trayvon" to "Chief is gone, Zimmerman is next."

Fulton was teary-eyed when she addressed the crowd, telling them "we want justice for Trayvon" before referencing a popular Bible verse when she said she had been reminded to "trust in the Lord with all thy heart and lean not on thy own understanding" during the past month.

"If Trayvon were here, he would have been here tonight," he said. "He was a people person. Let's get justice for your son."

Familiar chants like "No justice, no peace" were also sung throughout the night. At least four charter buses from Atlanta brought rally goers.

Martin's parents both spoke to the crowd just hours after they sat down with Scott who announced that the local state attorney, Norman Wolfinger, had recused himself from the case. In a letter to Scott, Wolfinger said that while he thought he could fairly oversee any prosecution that develops in the case, his recusal was aimed at "toning down the rhetoric and preserving the integrity of the investigation."

Scott appointed Angela B. Corey, the state attorney for the Jacksonville area, to take over the case.

That announcement by the attorney for Martin's parents brought a loud cheer.

Sharpton took up an impromptu monetary collection for Martin's parents. He started it off with a $2,500 pledge and he was joined by Greg Mathis and Baisden who both pledged $10,000 each. Former New York Gov. David Paterson also gave $2,000. Paterson was among several state and national politicians at the rally.

Buckets were also passed throughout the crowd with Sharpton telling them "Y'all show the world we're gonna finance our own movement."

There was a brief moment of booing, when Sanford Mayor Jeff Triplett addressed the crowd.

But U.S. Rep. Corrine Brown quickly quieted it when she told them how Triplett flew to Washington, D.C., and met with congressmen for five hours about the case and helped get the 911 tapes released to the public, which generated a social media buzz that propelled the case nationally.

Brown also announced that they hope to have hearings in Washington with the Justice Department about the case as early as Tuesday. The FBI is looking into what happened.

Dick Gregory, a comedian who uses humor to convey his civil rights message, said the steady pressure should be the goal going forward.

"All you have to do is be a turtle," he said. "Hard on the outside, soft on the inside and willing to stick your neck out."