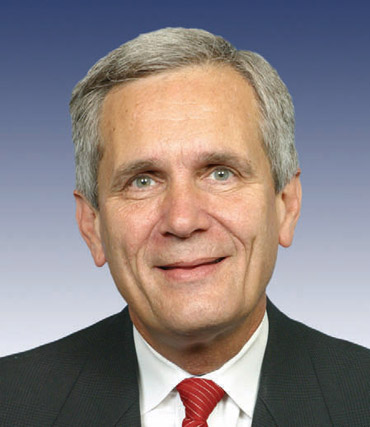 (gpoaccess.gov)
Democrats in Congress are under pressure from their leadership and the White House to spend the August recess selling health care reform to their constituents, through town halls and other events.

But what happened to Rep. Lloyd Doggett (D-Texas), left, over the weekend could be a sign of what's to come to some Democrats who represent some Republican-leaning states or districts.

Doggett was holding a town hall at a supermarket in Austin when it was interrupted by what could be called a rally against President Obama's health care plans. A video of the protestors chanting "just say no" over and over again appeared on YouTube (and you can watch it below).

The Austin American Statesman's Patrick George reports that the protestors began after someone asked whether the congressman would support the bill even if he found his constituents were against it, and Doggett said he would.

Several within the mob had signs protesting "socialized medicine," as Politico's Glenn Thrush points out.

Politico's Martin Kady II adds that it seems the protests are linked to "Tea Party" activists who arranged protests on Tax Day, April 15.

Politico points to this Web site -- Operation Embarrass Your Congressman – which says its mission is "To expose the arrogance, ignorance, and insolence of our elected representatives."

"These arrogant, ignorant, and insolent people have embarrassed America, trampled the Constitution, and ignored their constituents for far too long," the Web site reads. "Attend their townhall meetings during recess and press them with intelligent questions (unlike the main stream media), asked in an intelligent manner to see if they are really in touch and on board with 'the will of the people.'"

In addition, the liberal blog Think Progress has this memo by Bob MacGuffie of FreedomWorks, a GOP activist, which lists "best practices" for "rocking the town halls."

"And it's not because of any particular quality of the Democratic Party," Ambinder said. "It's simply if you're the party in power and you're trying to sell something that is very complex, those who are against it are going to get their people out to the meetings much more easily, much more efficiently than your party is."

"Not a lot of good television is going to come out of this month for the White House," he added. (You can watch more of the interview and the rest of Washington Unplugged here.)

Think Progress today also talked with Sen. Dick Durbin (D-Ill.), who fought back against the protests, saying he hopes his "colleagues won't fall for a sucker-punch like this."

"I think members should be out, speaking with the public, meeting with people who are the health care professionals and talking about the current situation," Durbin said. "I've done it and I'll continue to do it. But you know, I hope my colleagues won't fall for a sucker-punch like this. These health insurance companies and people like them are trying to load these town halls for visual impact on television…. That's almost like flooding the switchboards on Capitol Hill. It doesn't prove much other than the switchboards have limited capacity."

For his part, Doggett said today that he was more determined than ever to pass health care reform, reports W. Gardner Selby of the Austin American Statesman.

"This mob, sent by the local Republican and Libertarian parties, did not come just to be heard, but to deny others the right to be heard. And this appears to be part of a coordinated, nationwide effort. What could be more appropriate for the 'party of no' than having its stalwarts drowning out the voices of their neighbors by screaming 'just say no!'" Doggett said in the statement. "Their fanatical insistence on repealing Social Security and Medicare is not just about halting health care reform but rolling back 75 years of progress. I am more committed than ever to win approval of legislation to offer more individual choice to access affordable health care. An effective public plan is essential to achieve that goal."

It also should be noted that although Texas went for Republican John McCain in last year's election, Doggett's district voted for Mr. Obama by almost a 20 point margin.