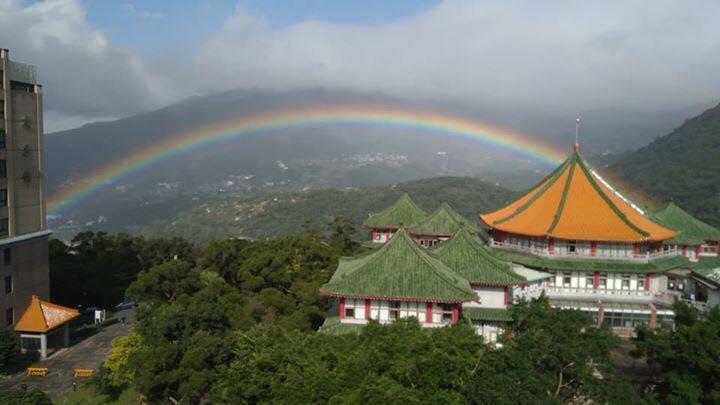 Somewhere over the rainbow, a new world record was in the making last week. Students in Taiwan anxiously watched their clocks and kept their eyes on the skies as they documented the longest-lasting rainbow known to mankind.

The rainbow arched over northern Taiwan for nearly nine hours — eight hours and 58 minutes, to be exact — making it the longest lasting rainbow on record, according to students and staff of Chinese Culture University in Taipei's mountains. The colorful sight stretched through the sky from 6:57 a.m. to 3:55 p.m. on Thursday, Nov. 30, 2017.

That would shatter the previous world record, set in Yorkshire, England, on March 14, 1994. The Yorkshire rainbow lasted six hours, according to the Guinness World Records.

"It was amazing … It felt like a gift from the sky ... It's so rare!" said Chou Kun-hsuan, a professor in the university's Department of Atmospheric Sciences who helped lead the efforts to document the rainbow, according to BBC News.

After witnessing a nearly six-hour-long rainbow the week prior, Kun-hsuan vowed to be prepared when another one appeared.

"After four hours, we mobilized all our students and began to notify everyone in the school to take pictures and send us pictures," Kun-hsuan said.

Chinese Culture University posted a bulletin on Thursday asking students and staff to send in any photos or videos they took of the rainbow to prove to the Guinness World Records that they had set a new world record.

"We need 'per second' photos to support this record, no matter how many of them are available," the school explained in an online statement.

With the nearly 10,000 pictures taken in the Department of Atmospheric Sciences alone, and thousands of others taken by students and residents in the area, Kun-hsuan believes they'll have enough to win the title.

"I'm confident we can prove to Guinness second by second that this rainbow lasted for nine hours," Kun-hsuan said.

Rainbows typically last much less than an hour, according to Guinness World Records.

But a seasonal northeast monsoon in the area trapped moisture in the air, forming clouds, sunlight and a relatively slow and steady wind speed of 5.5 to 11 miles per hour, to create the perfect atmospheric conditions to extend the the length and appearance of this particular rainbow, BBC News reports.

These conditions are common in winter in Taipei's Yangmingshan mountain range, where the Chinese Culture University campus is located. That makes it an ideal place to spot long-lasting rainbows, Kun-hsuan said.

In fact, the conditions are so perfect, Kun-hsuan said he intends to reach out to the city's tourism department to tout the colorful views.

"I plan to contact the Taipei City tourism department to promote this, 'You can see a nine-hour rainbow in Taipei in the winter, it's amazing! Come to Taipei!'" Kun-hsuan said.