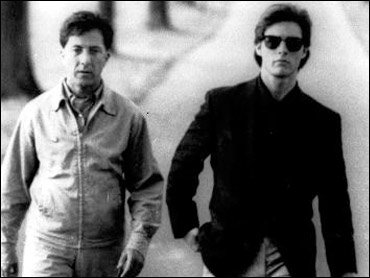 The man who inspired the title character in the Oscar-winning movie "Rain Man" has died.

Kim Peek was 58. His father, Fran, says Peek had a major heart attack Saturday morning and was pronounced dead at a hospital in the Salt Lake City suburb of Murray.

Peek was a savant with a remarkable memory and inspired writer Barry Morrow when he wrote "Rain Man," the 1988 movie that won four Academy Awards.

Fran Peek said his son met Morrow at a convention in the early 1980s and the writer was taken with Peek's knack for retaining everything he heard. Morrow wrote the script, and the movie went on to win Oscars for best film and best actor for Dustin Hoffman, whose repetitive rants about being an excellent driver and the "People's Court" about to start were a hit with moviegoers.

Although the character was technically fictional, Fran Peek said his son was every bit as amazing as Hoffman's portrayal of him. And Kim's true character showed when he toured the world, helping dispel misconceptions about mental disabilities.

"It was just unbelievable, all the things that he knew," Fran Peek said Monday. "He traveled 5,500 miles short 3 million air miles and talked to nearly 60 million people - half have been students."

In his later years, Peek was classified as a "mega-savant" who was a genius in about 15 different subjects, from history and literature and geography to numbers, sports, music and dates. But his motor skills were limited; he couldn't perform some simple tasks like dressing himself.

NASA scientists , hoping that technology used to study the effects of space travel on the brain would help explain his mental capabilities.

Fran Peek says the funeral will be next Tuesday in Taylorsville. Details were pending.