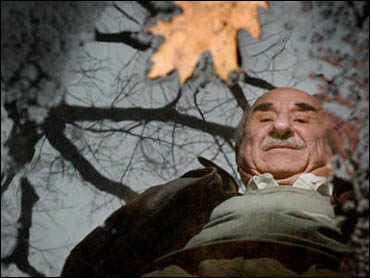 Mardy Nersesian's summer spent watching rainstorm after rainstorm at his northern Wisconsin cabin wasn't a total washout - it inspired him to spin a tale tall enough to earn him the title of world champion liar.

"We had so much rain during the spring and summer seasons, there were puddles on our lake," Nersesian said to win the Burlington Liars Club's annual contest.

Nersesian, of Racine, lives near Burlington in southeastern Wisconsin but had never before entered the contest, which started more than 70 years ago.

He found a clipping about it in a drawer at home and sat down to pen his fib, which he said was the result of the rainy spring and summer he and his wife spent at their cabin on Long Lake in Phillips.

"It was raining so hard on the lake it looked like there was water everywhere, even on the lake," said the 68-year-old retired high school art teacher.

His wife, Sue, didn't know he had submitted the lie until a certificate proclaiming him the world's best liar of 2004 arrived in the mail this week.

"He has a wonderful sense of humor and tells a lot of jokes, but they're all jokes he's heard from somebody else," Sue Nersesian said. "I don't know what prompted him to do this."

He was among 300 people from 11 states to send the contest fibs this year.

Honorable mentions among this year's entries include: