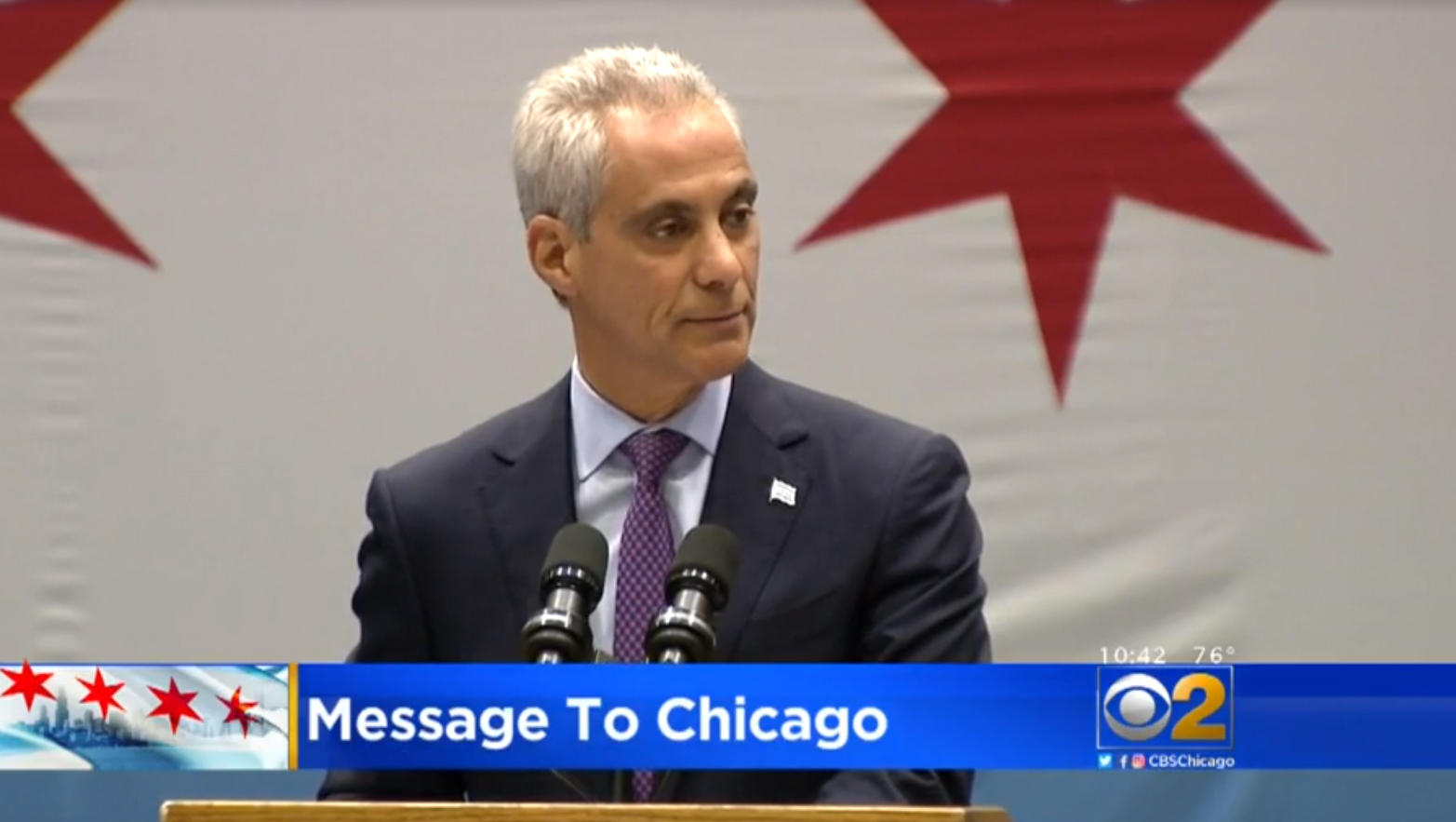 He used the invitation-only speech to cap off announcements in recent days that the citywill add nearly 1,000 police officers,​ expand the use of body cameras and require de-escalation training, reforms in the wake of an ongoing U.S. Department of Justice investigation of the police department.

The former White House chief of staff highlighted a new public-private mentoring partnership that’ll help over 7,000 youths over the next three years, veering from prepared remarks when describing the struggles young people face in neighborhoods tormented by gangs and violence.

“The deck has been stacked against the kids,” he said. “It’s time we reshuffle the deck and put our kids on the top of that deck.”

Inside the Malcolm X College gym on Chicago’s near West Side, security was tight and the reception was friendly with the audience of aldermen, community leaders and Emanuel administration members applauding at least a dozen times during the 40-minute speech. Outside, there were a few protesters calling for scrutiny of police misconduct investigations, a theme that’s rippled for months.

Emanuel, in his second term as mayor, has been trying to rebuild trust in his leadership, particularly after the 2014 death of Laquan McDonald, a black teenager shot 16 times by a white police officer. The officer was charged with murder, but only after a judge ordered the public release of the graphic squad car video last year. Circulation of the video prompted frequent protests, allegations of a cover-up and repeated calls for Emanuel to step down.

The Justice Department has since launched a systemic probe of department practices. And Emanuel, who initially opposed the idea of a federal probe, said Thursday that the city should work with federal agencies to improve.

“Fighting crime requires a partnership between the police and the community. And we all know that this partnership has been tested in Chicago,” he said. “It is a problem that has festered in this city for decades. The shooting of Laquan McDonald brought it to a breaking point.”

His speech also touched on new technology, including gunshot-tracing cameras; gun shop legislation; and the need for more neighborhood resources.

He bluntly asked Chicagoans for assistance. Calling respect “a two-way street,” he said there’s no pass for people to taunt police or for officers “belittling” citizens who need help.

“Every one of us has a role to play in rebuilding the vital partnership between our police and the community.  We all have to hold ourselves, and each other, to a higher standard,” he said. “So today I am calling on all Chicagoans to join in a comprehensive plan - a blueprint - to confront gun violence.”

Emanuel recapped changes instituted by his administration, including abolishing the agency that handles police investigations and pitching a new system for reviewing police misconduct and department audits.

Chicago has seen a dramatic rise in the number of shootings and homicides this year. In August alone, there were 90 homicides, marking the first time in two decades there have been that many in a single month. Overall, the city has recorded more than 500 homicides this year - higher than all of 2015 - and is on pace to climb past the 600-homicide mark for the first time since 2003.

The city’s image has also come up on the presidential campaign trail with Republican nominee Donald Trump suggesting Thursday that Chicago is more violent than Afghanistan. Trump also endorsed a stop-and-frisk policing method for the city, which a federal judge said New York City used unconstitutionally because of its overwhelming impact on minority residents.

During the speech he described several high-profile cases, his voice cracking when noting the shooting death of the 19-year-old son of a Chicago police officer.

Emanuel didn’t specify how the city would pay for the new efforts in his speech, including the addition of the new officers, which is expected to cost about $134 million.

The addition of police has prompted criticism from groups including Black Lives Matter, who say resources should be spent on schools, health care and affordable housing.

Alderman Willie Cochran said he was encouraged by Emanuel’s efforts, but said more could have been done sooner.

“He knew all along there was a need,” he said. “The proof is in the pudding.”