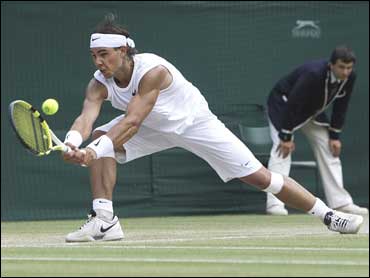 Rafael Nadal ended Roger Federer's five-year reign at Wimbledon on Sunday, winning a riveting, five-set marathon to claim his first title at the All England Club and signal a changing of the guard in men's tennis.

Nadal, the first Spaniard to win Wimbledon since Manolo Santana in 1966, avenged his losses to Federer in the last two finals here and snapped the Swiss star's All England Club winning streak at 40 matches and overall grass-court run at 65.

CBS News correspondent Mark Phillips reports rain twice forced the players off the court, serving only to increase to the tension. There were doubts as to whether the match would even finish as night approached.

The contest finally ended in near darkness after 4 hours, 48 minutes of play - the longest men's final in Wimbledon history - when Federer slapped a forehand into the net on Nadal's fourth match point and second of the game.

Nadal fell onto his back in exhilaration at the baseline and, after congratulating Federer, climbed into the players' box to embrace his entourage. With his tears in his eyes, he grabbed a Spanish flag and went over to the edge of the Royal Box to shake hands with Prince Felipe and Princess Letizia of Spain.

Federer, who converted only one of 13 break points in the match, fell short in his bid to set two historic landmarks: He failed to surpass Bjorn Borg by winning a sixth consecutive title or match Willie Renshaw's all-time record of six in a row from 1881-86.

Watching it all from the front row of the Royal Box was the silver-haired Borg, who won 41 straight Wimbledon matches during his 1976-80 title runs.