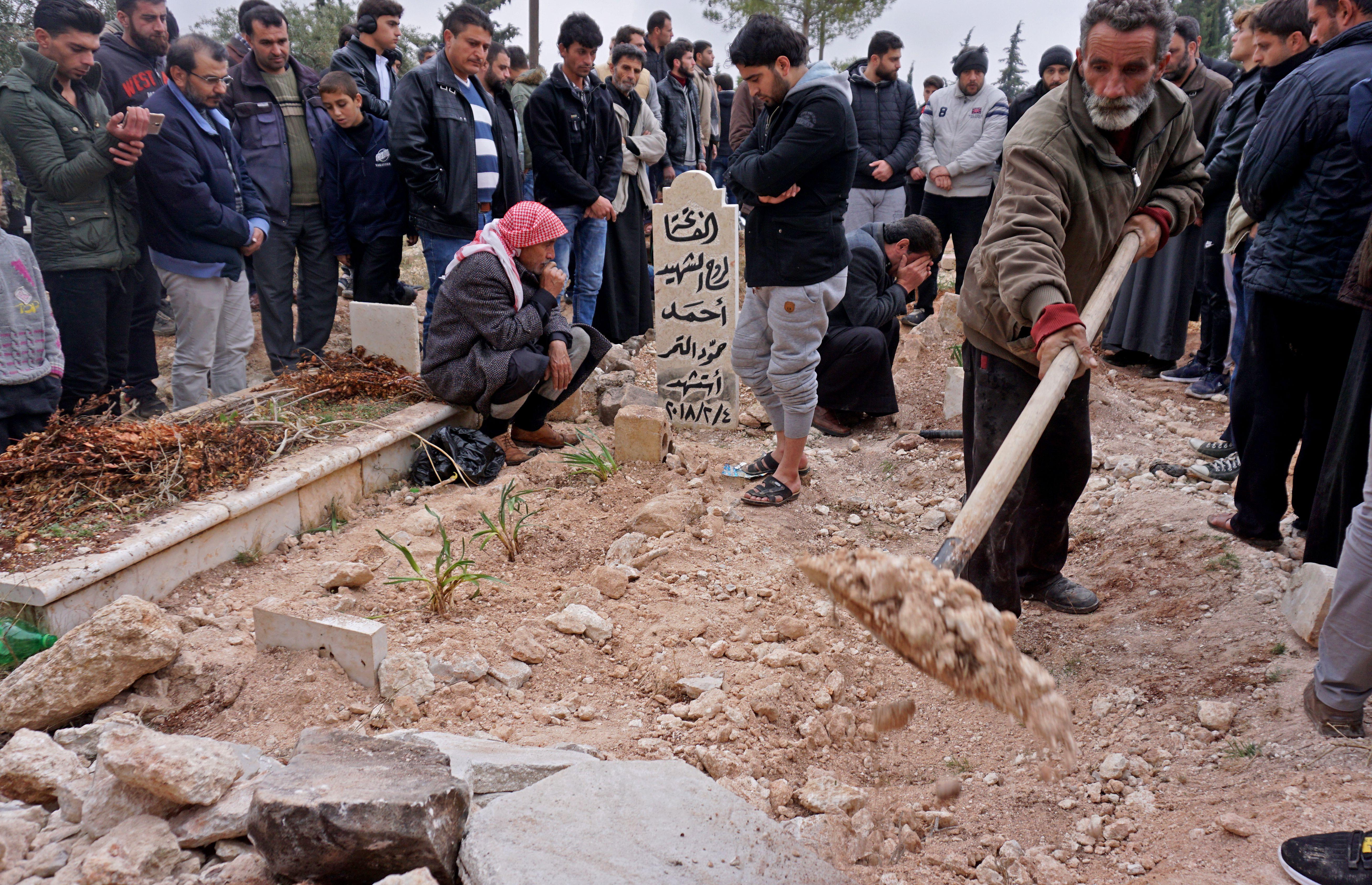 BEIRUT -- U.S. and British officials mourned the loss a Syrian anti-government activist and radio host seen as a "symbol" of the uprising who was shot dead along with his colleague by unidentified gunmen in a rebel-held area in the country's northwest, where government strikes on Saturday killed at least five people in violation of a cease-fire.

Dozens of Raed Fares and Hammoud al-Juneid's friends held a wake Saturday in their hometown of Kafranbel in Idlib province, while scattered protests in opposition-held areas condemned their killing and blamed radical Islamists, of whom Fares was a vocal critic.

Fares brought global attention to Syria's war, and Kafranbel, with his humorous English-language protest banners that took jabs at his government and the international community's response to the conflict. He also was a vocal critic of the Islamist militants who gained sway as the conflict raged on, and now control Idlib and his hometown.

In 2013, Fares posted a satirical YouTube video depicting cave men repeatedly killed by the men representing the Syrian government as men wearing American and European Union flags idly sit by.  "This is how the international community reacted to the genocide committed by Assad against the Syrian people," Fares wrote.

That same year, Fares founded the local station Fresh Radio to report on the conflict. It was U.S.-funded until Washington cut finances to the Syrian opposition. Fares cautioned that the move would harm the moderates and fuel more extremism.

In a Washington Post opinion piece earlier this year, Fares urged the U.S. to resume financial support for Fresh Radio, writing that "the terrorist groups (and the regime) see us as a direct threat."

Fares and al-Juneid were buried Friday after a large silent procession where their bodies were hoisted on mourners' shoulders then carried in open-backed cars, wrapped in the flag of the Syrian revolution.

They "never shied from speaking the truth and upholding the original values of the revolution," said Jim Jeffrey and Joel Rayburn, U.S. State Department officials in charge of Syria policy. The officials described them in a statement as "patriots" who documented the "crimes" of the Syrian government.

Al-Juneid was a cameraman who worked with Fares.

The British envoy to Syria, Martin Longden, called their killing a "loss to Syria and its future."

Fares survived an earlier assassination attempt and was imprisoned by Islamist militants dominant in Idlib.

"He really was the main pillar of the radio. We owe it to him to continue the project he started," said Fares Barakat, a colleague of Fares at Radio Fresh.

Meanwhile in Idlib, the Syrian Observatory for Human Rights and civil defense workers said government artillery shelled an opposition-held town, hitting students as they were leaving their school and killing at least three women and two children. The shelling in Jarjanaz, to the east of Kafarnbel, is in violation of a cease-fire deal in place in Idlib since September. The Observatory said two others were also killed in the shelling.

A wave of targeted killings and shootings inside rebel-held Idlib and surrounding areas has claimed more than 390 lives since April, according to the Britain-based Observatory.

Omar Abou Leila, a Deir el-Zour monitor based in Europe, said the intense fighting has displaced dozens of civilians who fled as IS militants expanded their areas of operation, driving out the U.S.-backed Syrian Democratic Forces.

The Observatory said the militants pushed their way out of Hajin, their central holdout in their last pocket which lies near the border with Iraq.

The U.S.-led offensive against IS in eastern Syria began in September.

Also Saturday, in a new development under a deal mediated by Russia and Turkey, the Syrian government and the armed opposition swapped prisoners at a crossing in northern Syria, Turkey and the Observatory said.

The Turkish foreign ministry said in a statement that the Syrian government and armed opposition groups "mutually and simultaneously" set free an unspecified number of people. It said the swap was part of a "pilot project" under the framework of the Russia-Turkey-Iran-backed Astana process to release detainees, kidnapped, exchange bodies and search for missing persons.

It also said the United Nations participated along with the three Astana guarantors. The people were freed at the Abu Zindeyn crossing in northern Syria Saturday.

Syrian state media reported the release of nine men and one woman, showing them in a bus in northern Syria, but it gave no details about the conditions of their release.

The Observatory said the government also released 10 prisoners. The identities of those released from either side was immediately not clear.