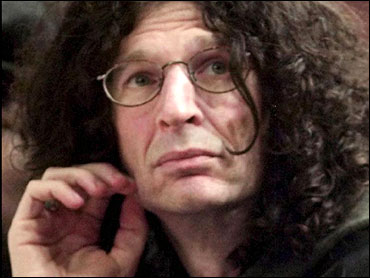 On the eve of a House hearing on broadcast indecency, the nation's largest radio station chain suspended shock jock Howard Stern's show, saying it did not meet the company's newly revised programming standards.

Stern expressed a measure of frustration on his show Thursday, which is still being carried on stations owned by the rival radio network that distributes his show to major city markets nationwide.

Stern blamed the suspension on the hearing "because the Clear Channel guy's being called up in front of the committee today" and likened it to the McCarthy anti-communist hearings of the 1950s.

"As the FCC and the Congress push on Howard Stern, that's like poking a dog with a stick. He's just going to bite back and be every bit as bad a boy as he's been over the last 10 years," Boston University communications professor Tobe Berkowitz told CBS radio station WBZ-AM.

Stern's suspension Wednesday by Clear Channel Radio was the second time in two days that the company has acted against a disc jockey.

The company on Tuesday fired the DJ known as "Bubba the Love Sponge," whose show drew a record fine of $755,000 from the Federal Communications Commission. The program aired in four Florida cities and included graphic discussions about sex and drugs "designed to pander to, titillate and shock listeners," the FCC said.

The program is still heard on about three dozen stations, including some of Viacom's Infinity Broadcasting stations. Stern's flagship station is Infinity's WXRK-FM in New York. However, the program is not syndicated by Infinity or Viacom; Stern's company negotiates individual deals with each station or group.

Infinity and CBSNews.com are both part of Viacom.

Under pressure from federal regulators and lawmakers, broadcasters are revisiting their indecency standards, delaying live broadcasts so they can delete offensive material and telling parents how to block specific programs.

Their actions previewed a House subcommittee hearing Thursday on indecency, the second this month. Scheduled to appear were executives from ABC, Fox, NBC, Pax and Clear Channel Communications.

The panel, the House Energy and Commerce telecommunications subcommittee, heard from Mel Karmazin, president of CBS and UPN parent Viacom Inc., two weeks earlier, just before voting to increase the maximum fine for indecency from $27,500 to $275,000.

In response to letters from FCC Chairman Michael Powell, CBS and Fox outlined steps they were taking: Airing live programs on time delays, displaying ratings for programs on their Web sites, reviewing standards and practices, launching ad campaigns to let parents know about the V-chip, and reminding affiliate stations they may reject network programming viewed as unsuitable for their communities.

ABC and NBC have not yet responded.

"True and lasting change will only be achieved if the broadcast community recommits to its public service roots and its tradition of abiding by community standards of decency," Powell wrote, urging a return to a voluntary code of conduct, which was dropped in 1982 under Reagan administration pressure.

Under FCC rules and federal law, radio stations and over-the-air television channels cannot air material that refers to sexual and excretory functions between 6 a.m. and 10 p.m., when children may be tuning in. The rules do not apply to cable and satellite channels and satellite radio.

Dr. Frank Wright, president of the National Religious Broadcasters, questioned how long the broadcasters' concern about indecency will last.

"Some of this hand-wringing in public is from the very people who have brought us a rogue's gallery of shock jocks," said Wright, whose association of Christian radio and TV broadcasters counts 1,700 members.

Officials at Clear Channel announced a new indecency policy Wednesday that includes companywide training, possible fines against DJs, and automatic suspensions for anyone accused by the FCC of violating indecency rules on the air.

"Clear Channel drew a line in the sand today with regard to protecting our listeners from indecent content and Howard Stern's show blew right through it," John Hogan, president and CEO of Clear Channel Radio, said in a news release. "It was vulgar, offensive, and insulting, not just to women and African Americans but to anyone with a sense of common decency."

Hogan said the show would not air on the company's stations until it adheres to acceptable broadcasting standards. Hogan was testifying at the House hearing.

In response to a caller's comment, Stern Thursday revealed there is a 90-second taped delay for his show. The standard for most radio call-in shows is six to eight seconds.