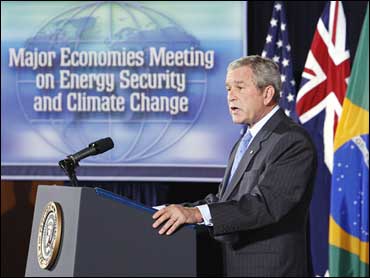 President Bush said Saturday he will sign a must-pass bill to prevent a government shutdown, but not without complaint. Meanwhile, Democrats gave a 12-year-old the microphone to defend their spending priorities.

Bush lambasted the Democrats who control Congress for not sending him a single one of the dozen spending bills funding the day-to-day operations of 15 Cabinet departments, requiring the stopgap measure while they continue working on the legislation.

"Congress failed in its most basic responsibility," the president said in his weekly radio address. He said he would sign the measure Saturday.

The bills are tied up because Democrats want to add $23 billion for domestic programs to Bush's $933 billion request for the approximately one-third of the federal budget funded by the yearly spending bills. Bush has threatened vetoes on most of the bills, eager to re-establish his party's reputation as the place to go for fiscal discipline.

The president said Democrats are planning the "biggest tax increase in American history" to pay for the new spending.

"Earlier this year congressional leaders promised to show that they could be responsible with the people's money," he said. "Unfortunately they seem to have chosen the path of higher spending."

Democrats say their spending add-ons are relatively modest given the overall size of the budget and in comparison with Bush's pending $189 billion request for Pentagon operations in Iraq and Afghanistan in 2008. And most of the additional money, Democrats say, simply restores cuts proposed by Bush to popular programs such as community development grants, health research and anti-crime initiatives.

The new fiscal year begins Monday, and something had to be done before then or the government's authority to spend money would run out.

While calling this situation "disappointing," Bush extended a bit of an olive branch to Congress. He expressed his thanks that lawmakers passed a clean temporary measure with no new spending or policies, and that the measure does the same for a popular health insurance program covering children from low-income families. That program also is the subject of veto showdown between the president and the Democratic majority on Capitol Hill.

The stopgap spending bill will keep Cabinet departments running at current levels through mid-November, extend financing for the children's insurance program, and dip deeply into a $70 billion fund for Pentagon operations in Iraq and Afghanistan.

Such stopgap funding bills are routine and have been needed every year since 1994. But for the first time in five years, not one of the 12 annual appropriations bills have become law by the Oct. 1 deadline.

The children's insurance program now covers 6.6 million children from modest-income families not poor enough to qualify for Medicaid. Democrats, with significant support from Republicans, want to expand it. Their plan would add $35 billion, funded by new tobacco taxes.

Analysts say the legislation would allow about 4 million of the estimated 9 million uninsured children in the United States gain coverage.

Democrats enlisted a 12-year-old boy to promote the program during the party's weekly radio address Saturday.

Graeme Frost, of Baltimore, suffered severe brain damage in a car accident three years ago. He said the children's insurance program allowed him to get the medical help he needed.

"I just hope the president will listen to my story and help other kids be as lucky as me," Graeme said.

Bush wants a $5 billion increase in the program, and took a fresh dig at the Democrats on the issue.

"Congressional leaders have put forward an irresponsible plan that would dramatically expand this program beyond its original intent," he said. "And they know I will veto it."