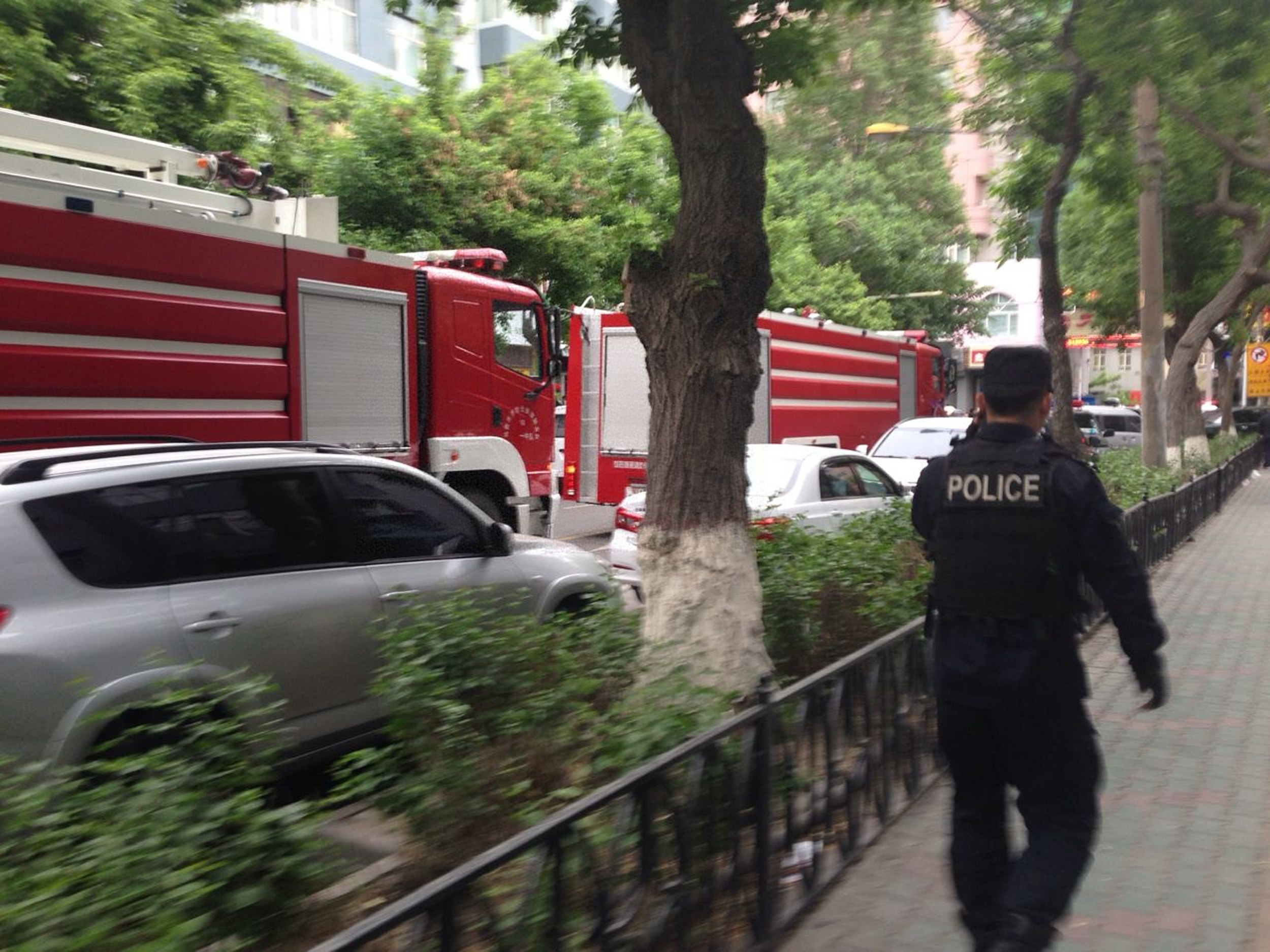 BEIJING -- Thirty-one people were killed and more than 90 injured in an attack Thursday on a busy street market in the capital of China's volatile northwestern region of Xinjiang, the local government said, the bloodiest in a series of violent incidents blamed on radical separatist Muslims.

The Xinjiang regional government said in a statement that the early morning attack in the city of Urumqi was "a serious violent terrorist incident of a particularly vile nature."

The assailants crashed through metal barriers in a pair of SUVs at 7:50 a.m. and plowed through crowds of shoppers while setting off explosives, the statement said.

The vehicles then crashed head-on and one of them exploded, the official Xinhua News Agency reported. It quoted an eyewitness as saying there were up to a dozen blasts in all.

It was not immediately clear who was responsible for the attack, but recent violence in the region has been blamed on extremists from Xinjiang's native Turkic Uighur Muslim ethnic group seeking to overthrow Chinese rule in the region.

The death toll was the highest for a violent incident in Xinjiang since days-long riots in Urumqi in 2009 between Uighurs and China's majority Han left almost 200 people dead. Thursday's attack also was the bloodiest single act of violence in Xinjiang in recent history.

"I heard four or five explosions. I was very scared. I saw three or four people lying on the ground," Fang Shaoying, the owner of a small supermarket located near the scene of the attack, told The Associated Press by phone.

Photos from the scene posted to popular Chinese social media site Weibo showed at least three people lying in a street with a large fire in the distance giving off huge plumes of smoke. Others were sitting in the roadway in shock, with vegetables, boxes and stools strewn around them. Police in helmets and body armor were seen manning road blocks as police cars, ambulances and fire trucks arrived on the scene.

Urumqi was the scene of a bomb attack at a train station late last month that killed three people, including two attackers, and injured 79. Security in the city has been significantly tightened since that attack, which took place as Chinese President Xi Jinping was visiting the region.

In response to Thursday's attack, Xi pledged to "severely punish terrorists and spare no efforts in maintaining stability," Xinhua reported.

Prior to last month's train station attack, the city had been relatively quiet since the 2009 ethnic riots amid a smothering police presence.

The station attack and other violence have been blamed on Uighur extremists, but information about events in the area, which is about 1,550 miles west of Beijing, is tightly controlled.

Tensions between Chinese and ethnic Uighurs in Xinjiang have been simmering for years, but recent attacks - while still relatively crude - show an audaciousness and deliberateness that wasn't present before. They are also increasingly going after civilians, rather than the police and government targets of past years.

In an unprecedented incident last year, three Uighurs rammed a vehicle into crowds in a suicide attack near the Forbidden City gate in the heart of Beijing, killing themselves and two tourists.

And in March, 29 people were slashed and stabbed to death at a train station in the southern city of Yunnan blamed on Uighur extremists bent on waging jihad.

Uighur activists say the violence is being fueled by restrictive and discriminatory policies and practices directed at Uighurs and a sense that the benefits of economic growth have largely accrued to Chinese migrants while excluding Uighurs. The knowledge that Muslims elsewhere are rising up against their governments also seems to be contributing to the increased militancy.

Thursday's attack came two days after courts in Xinjiang sentenced 39 people to prison after they were convicted of crimes including organizing and leading terrorist groups, inciting ethnic hatred, ethnic discrimination and the illegal manufacturing of guns.

Among those convicted Tuesday was 25-year-old Maimaitiniyazi Aini, who received five years in prison for inciting ethnic hatred and ethnic discrimination for comments he made in six chat groups involving 1,310 people, the Supreme Court said.

In another case, a Uighur man was jailed for 15 years after he preached jihad, or holy war, to his son and another young man, according to the court.