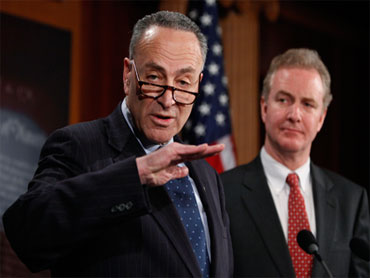 Abu Hamza al-Masri, a flamboyant figure with two hooks for hands and a glass eye, declined to consent to extradition during a brief appearance before a magistrate. He laughed, shrugged and then told the court: "I don't really think I want to, no," al-Masri said.

The United States will almost certainly have to rule out the death penalty to get England to hand al-Masri, 47, over for trial. CBS News Correspondent Mark Phillips reports the U.S. has already quietly offered to drop the death penalty option in Abu Hamza's case.

"I suspect that if the U.S. wants him to face justice here badly enough it will make some sort of extradition deal to satisfy Britain's concerns about the death penalty," said CBSNews.com Legal Analyst Andrew Cohen. "If not, it likely will take a long while before we see this case proceed here in the States."

The arrest came a day after U.S. officials warned that a stream of credible intelligence indicates a major terrorist attack could occur this summer, and the FBI posted a list of seven wanted al Qaeda operatives.

A volatile preacher with one eye and hooks for hands — lost, he says, fighting Soviet troops in Afghanistan in the 1980s — al-Masri has long been the focus of terrorism suspicions there.

Al-Masri, whose real name is Mustafa Kamel Mustafa, was the imam at the Finsbury Park Mosque, which has been linked to Moussaoui and Reid and was shut down in January 2003 after an anti-terrorism raid. Moussaoui is awaiting trial in the United States, and Reid is serving a life term for trying to blow up a trans-Atlantic flight with explosives hidden in his shoe.

Al-Masri has sparked outrage with sermons calling the invasion of Iraq a "war against Islam," claiming the Sept. 11 attacks were a Jewish plot and calling the Columbia space shuttle disaster a "punishment from Allah" because Christian, Jewish and Hindu astronauts were aboard.

A grand jury in New York brought an 11-count indictment against al-Masri on April 19, and the charges were announced Thursday.

Prosecutors said al-Masri sought to incite a holy war around the world, and played a major role in a 1998 hostage situation in Yemen that left three British tourists and an Australian visitor dead.

The indictment charged him with hostage-taking and conspiracy in connection with the incident, and also alleges he provided material support to al Qaeda and the Taliban to foment a holy war in Afghanistan.

Ashcroft said al-Masri tried to establish a terrorist camp between 1999 and 2000 in Bly, Ore., to teach "violent jihad." The indictment provides few specifics about the camp, but says al-Masri had several discussions about setting up the camp in late 1999.

The Egyptian-born Al-Masri, who married a British woman and took British citizenship in 1981, denies any involvement in violence and says he is only a spokesman for political causes.

The Oregon camp has generated interest from prosecutors in the past. They have previously said that American citizen James Ujaama, a Muslim convert with ties to al-Masri, had also conspired to set up the camp, expressing the need for jihad training, "the building of underground bunkers to hide ammunition and weapons, the creation of poisonous materials for public consumption, and the firebombing of vehicles."

Ujaama was sentenced to two years in prison in February in Seattle. He pleaded guilty last year to aiding the Taliban in exchange for his cooperation in terrorism investigations.

British Home Secretary David Blunkett said Thursday that an agreement with American officials last year specified that in al-Masri's case, "they will not carry out an execution."

There was no immediate confirmation from the Justice Department. But the United States has in the past agreed not to seek the death penalty in cases involving extradition from countries such as Britain.