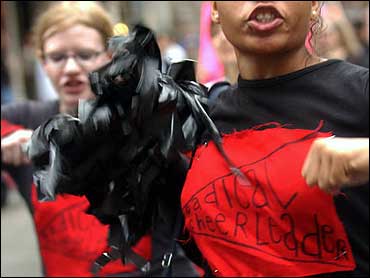 The Radical Cheerleaders, a loose network of young, mostly female activists, have put a new face on protest. Using the same moves performed by a high school pep squad, they've heckled for livable wages at an Alabama Taco Bell, chanted anti-war rhymes on
Boston Common and marched in the Saskatchewan Pride Parade.

"We do for our fellow activists what cheerleaders do for sports players: we get people going," said Betsy Housten, 24, of the New York City Radical Cheerleaders.

Housten has cheered at the mayor's doorstep to demand citywide recycling and at a burlesque club to raise money for a feminist bookstore. Now her group is collecting anti-globalization cheers for a trip to Miami, where large demonstrations are planned for Nov. 19-21, when Pan-American leaders meet to discuss the Free Trade Area of the Americas.

There are squads in Phoenix, San Diego and Ottawa and on several college campuses, with names like the Rocky Mountain Rebels and the Memphis Dirty Southern Belles. Many have their own Web sites, featuring cheers and links to other activist groups. Some, like the New York cheerleaders, use Internet newsgroups and telephone hot lines to organize practices and rallies.

It's hard to estimate the number of radical cheerleading groups in the country, since nobody's keeping track. Their largest gathering to date was in 2001, when squads from all over North America attended a convention in Ottawa. Organizers expect about 1,000 cheerleaders to protest in Miami.

Though all seem to share a decidedly liberal bent, each cheerleading squad has a different approach. Some sport coordinated uniforms (often in red and black, the unofficial anarchist team colors,) and shake pompoms fashioned from garbage-bags. Others are less organized.

The New York squad numbers about 25, ranging in age from 7-year-old Arielle to her mother, Toby Willner, 42. Most are twenty-somethings. There's even a man, though squads are generally female.

The cheerleaders' reach extends beyond North America: In 2000, O'Hara said, American activists started a cheerleading squad outside the International Monetary Fund meeting in Prague. It included women from all over Europe.

"Now there are squads in Sweden, London, Warsaw and Ireland," said 26-year-old Emily O'Hara, a founder of the New York squad who is known on the protest circuit as Mary Christmas. "It's becoming this new crazy thing there."

Those involved say radical cheerleading got its start with two sisters from Miami - Aimee and Cara Jennings - who wanted women to play a greater role at protests.

Aimee Jennings, who now lives in New York, said inspiration struck after demonstrations at the 1996 Democratic National Convention in Chicago. "People were acting really goofy for the media, but with no message," Jennings recalled. "The people who had the bullhorn got to state the message, and most them were boys."

Jim Lord, executive director of the American Association of Cheerleading Coaches and Advisors in Memphis, has no problem with the squads.

"Most people see cheerleading as a very athletic and empowering activity," he said.

Groups like the Radical Cheerleaders contribute to the sense of festivity at a political rally, says Todd Gitlin, a social activism expert and professor at Columbia University's Graduate School of Journalism.

"Often people who organize demonstrations want to do more than apply their presence to political ends," Gitlin said. "They want to project a presence that seems like an embodiment of their values. Cheerfulness says, 'we are having a better time than they are. It promises recruits, 'stick around, you'll have more fun."'

That promise is just what drew Toby Willner of Brooklyn. "I was so excited to find people doing activism who were having a good time," Willner said.