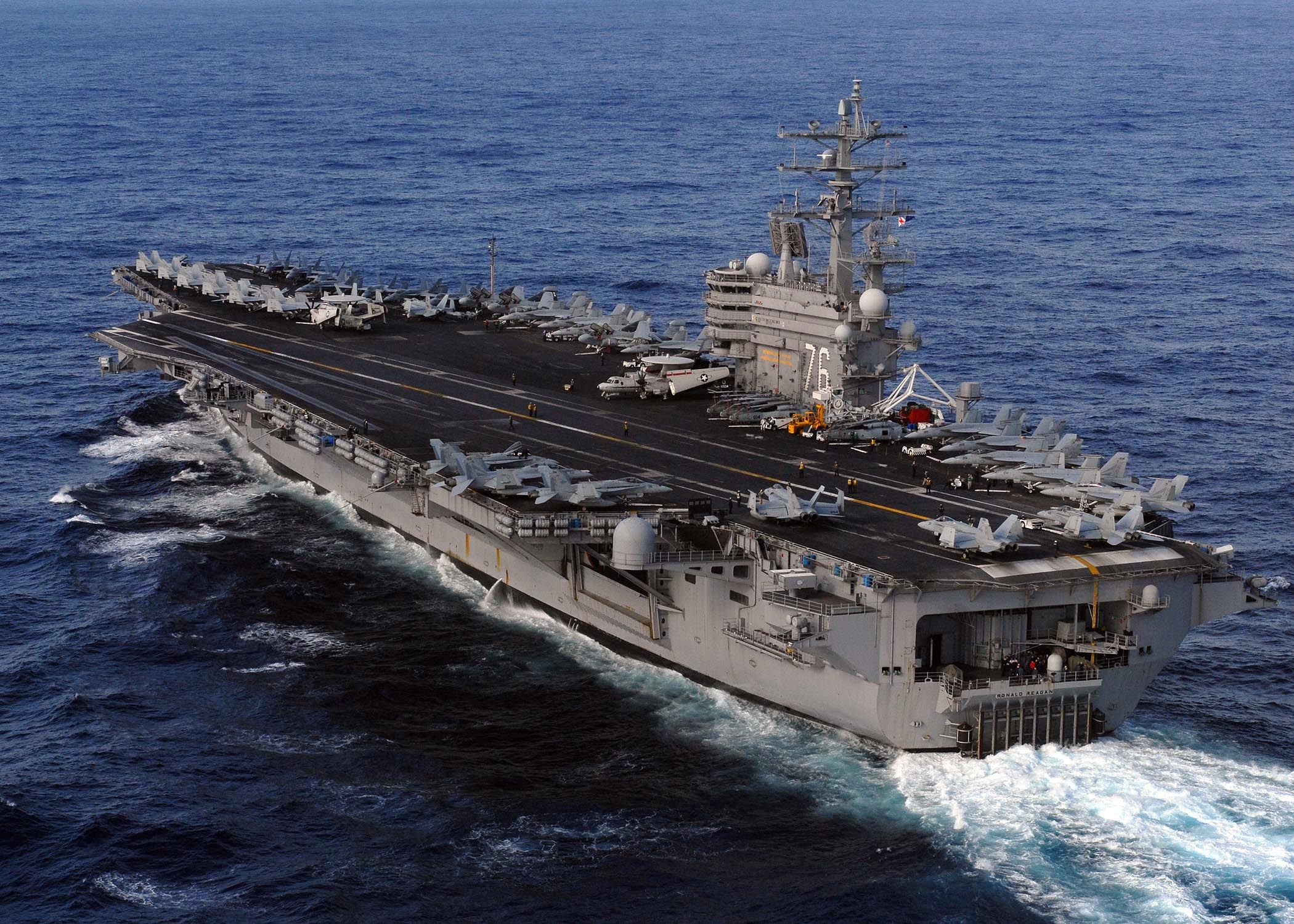 TOKYO - The U.S. Seventh Fleet said Monday it had moved its ships and aircraft away from a quake-stricken Japanese nuclear power plant after discovering low-level radioactive contamination.

CBS News national security correspondent David Martin reports that there were two separate radiation exposures on the aircraft carrier USS Ronald Reagan. The first was to air crews who were swabbed upon returning from search and rescue (SAR) missions, 17 of whom were found to have received the equivalent of a month's radiation and had to be decontaminated.

The second exposure occurred when the carrier's shipboard alarms went off. Since the Reagan is nuclear-powered, it has sensors to detect radioactivity, said Martin, and those went off as soon as the radiation levels went above the naturally-occurring background.

The fleet said that the radiation was from a plume of smoke and steam released from the crippled Fukushima Dai-Ichi Nuclear Power Plant, where there have been two hydrogen explosions since Friday's devastating earthquake and tsunami.

The aircraft carrier USS Ronald Reagan was about 100 miles offshore when its instruments detected the radiation. The fleet said the dose of radiation was about the same as one month's normal exposure to natural background radiation in the environment, and no one was exposed to levels that would have made them sick, reports CBS News correspondent Celia Hatton.

The power plant and its plume are south of Sendai, so as long as the wind doesn't shift, the Reagan can stay out of the plume and still be in position to conduct SAR missions.

Water levels dropped precipitously Monday inside one of the stricken nuclear reactor, twice leaving the uranium fuel rods completely exposed and raising the threat of a meltdown, hours after a hydrogen explosion tore through the building housing a different reactor.

Water levels were restored after the first decrease but the rods remained exposed late Monday night after the second episode, increasing the risk of the spread of radiation and the potential for an eventual meltdown.

The cascading troubles in the Fukushima Dai-ichi plant compounded the immense challenges faced by the Tokyo government, already struggling to send relief to hundreds of thousands of people along the country's quake- and tsunami-ravaged coast where at least 10,000 people are believed to have died.

Later, a top Japanese official said the fuel rods in all three of the most troubled nuclear reactors appeared to be melting.

Operators knew the sea water flooding would cause a pressure buildup in the reactor containment vessel — and potentially lead to an explosion — but felt they had no choice if they wanted to avoid a complete meltdown. In the end, the hydrogen in the released steam mixed with oxygen in the atmosphere and set off the blast.

Of all these troubles, the drop in water levels at Unit 2 had officials the most worried.

"Units 1 and 3 are at least somewhat stabilized for the time being," said Nuclear and Industrial Agency official Ryohei Shiomi "Unit 2 now requires all our effort and attention."

"It is very likely that they have been damaged by now," he said.

In some ways, the explosion at Unit 3 was not as dire as it might seem.

The blast actually lessened pressure building inside the troubled reactor, and officials said the all-important containment shell -- thick concrete armor around the reactor -- had not been damaged. In addition, officials said radiation levels remained within legal limits, though anyone left within 12 miles of the scene was ordered to remain indoors.

Authorities have been pouring sea water into three reactors at the plant after cooling system failures in the wake of Friday's massive earthquake and tsunami, which is estimated to have killed at least 10,000 people.

The U.S. Nuclear Regulatory Commission has sent two of its officials with expertise in boiling water nuclear reactors to assist with the nuclear crisis following an official request from the Japanese government.

Before Monday's explosion, officials were aware of the risk of a blast. Operators knew that flooding Unit 3 with sea water would cause a pressure buildup in the reactor containment vessel but felt they had no choice if they wanted to avoid a total meltdown.

Nuclear energy expert Cham Dallas explained on "The Early Show" Monday that the use of seawater to try and cool the reactor cores after power was lost was truly a "last-ditch effort." He said the two explosions seen thus far at the plant were not radiation blast, but due rather to the buildup of huge amounts of hydrogen gas inside the reactors as the seawater evaporated upon contact with the overheating nuclear fuel rods.

On Saturday, a similar hydrogen blast destroyed the housing around the complex's Unit 1 reactor, leaving the shell intact but resulting in the mass evacuation of more than 185,000 people from the area.

More than 180,000 people have evacuated the area in recent days, and up to 160 may have been exposed to radiation — pouring misery onto those already devastated by the twin disasters.

While Japan has aggressively prepared for years for major earthquakes, reinforcing buildings and running drills, the impact of the tsunami — which came so quickly that not many people managed to flee to higher ground — was immense.

By Monday, officials were clearly overwhelmed by the scale of the crisis, with millions of people having spent three nights without electricity, water, food or heat in near-freezing temperatures.

Officials in one devastated town said they were running out of body bags.

Officials have declared states of emergency at six Fukushima reactors, where Friday's twin disasters knocked out the main cooling systems and backup generators. Three are at Dai-ichi and three at the nearby Fukushima Daini complex.

Most attention, though, has been focused on Dai-ichi units 1 and 3, where operators have been funneling in sea water in a last-ditch measure to cool the reactors. A complete meltdown — the melting of the radioactive core — could release radioactive contaminants into the environment and pose major, widespread health risks.

Edano said no Fukushima reactor was near that point, and he was confident of escaping the worst scenarios.

International scientists say there are serious dangers but little risk of a Chernobyl-style catastrophe. Chernobyl, they note, had no containment shell around the reactor.

"The likelihood there will be a huge fire like at Chernobyl or a major environmental release like at Chernobyl, I think that's basically impossible," said James F. Stubbins, a nuclear energy professor at the University of Illinois.

And, some analysts noted, the length of time since the nuclear crisis began indicates that the chemical reactions inside the reactor were not moving quickly toward a complete meltdown.

"We're now into the fourth day. Whatever is happening in that core is taking a long time to unfold," said Mark Hibbs, a senior associate at the nuclear policy program for the Carnegie Endowment for International Peace. "They've succeeded in prolonging the timeline of the accident sequence."

But despite official assurances, many residents expressed fear over the situation.

"First I was worried about the quake," said Kenji Koshiba, a construction worker who lives near the plant. "Now I'm worried about radiation." He spoke at an emergency center in Koriyama, about 40 miles from the most troubled reactors.

Overall, more than 1,500 people had been scanned for radiation exposure in the area, officials said.

The U.N. nuclear agency said a state of emergency was also declared Sunday at another complex, the Onagawa power plant, after higher-than-permitted levels of radiation were measured there. It said Japan informed it that all three of those reactors there were under control.

Four nuclear complexes in northeastern Japan have reported some damage from the quake or the tsunami.