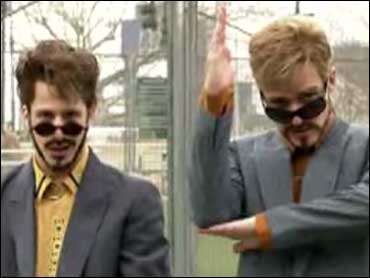 The Emmys got edgy as an off-color "Saturday Night Live" video featuring Justin Timberlake and strategically placed gift boxes was honored at the creative arts ceremony.

"(Blank) in a Box," last December's fake music video performed by Timberlake and "SNL" cast member Andy Samberg, is about wrapping a certain part of the male anatomy and presenting it to a loved one as a holiday present.

"I think it's safe to say that when we first set out to make this song, we were all thinking 'Emmy!'" Samberg said in accepting the award Saturday for best original music and lyrics.

"The other thing we were thinking was, 'Hey! Here's this young up and comer, Justin Timberlake, who is clearly very talented and could clearly use a break,'" Samberg said. "So, Justin, if you're out there, congrats to you, kid."

The video, which beat out competition that included two songs from a musical edition of "Scrubs," became an Internet sensation. It garnered millions of views on YouTube and NBC's Web site, which posted an un-bleeped version.

The Creative Arts Emmys, which recognize technical and other achievements for the 2006-07 season, will air Sept. 15 on E!, the night before the Primetime Emmy Awards on Fox.

Timberlake was elsewhere Saturday: He had a concert scheduled in Tacoma, Washington. But his tour takes him to Los Angeles on Primetime Emmys night, raising the possibility he could perform "Box" at the ceremony.

As Samberg arrived at the creative arts awards, he told The Associated Press that he had yet to be asked by the TV academy to perform the song with Timberlake on the Fox broadcast - but he was willing, he said.

Stritch, 82, who won for a guest shot on the comedy series "30 Rock," said that, even after a lifetime in show business, winning felt "un-(blanking)-believable." And Griffin, a winner for her reality series "My Life on the D-List," noted, "I guess Hell froze over!"

"A lot of people come up here and thank Jesus for this award. I want you to know that no one had less to do with this award than Jesus," Griffin said, going on to hold up her Emmy and proclaim, "This award is my god now!"

Despite the irreverence, both women generated huge laughter and received big applause from the crowd in the downtown Shrine Auditorium.

"I think I was nominated in 1951 for the most promising newcomer. I'm glad I finally realized my potential," Caron said.

"Bury My Heart at Wounded Knee" won a leading five awards. The film, which chronicles events leading up to the assassination of Sitting Bull and the Sioux massacre at Wounded Knee Creek in 1890, is up for more Emmy honors, including best TV movie, next weekend.

"This project has been a labor of love and a labor of conscience for everyone who worked on it," said executive producer Dick Wolf.

HBO collected the most trophies, 15, followed by NBC with 12, CBS with nine and Cartoon Network with eight. Fox earned seven awards, PBS six and ABC four.

The Emmys Awards, hosted by Ryan Seacrest, will air live Sept. 16 from the Shrine Auditorium in Los Angeles on Fox.