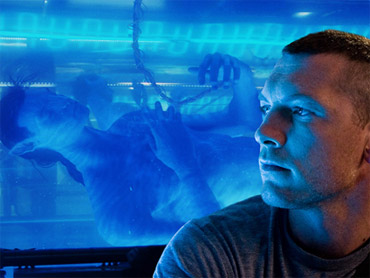 Near the end of the hit film "Avatar," the villain snarls at the hero, "How does it feel to betray your own race?" Both men are white - although the hero is inhabiting the body of a blue-skinned, 9-foot-tall, long-tailed alien.

Strange as it may seem for a film that pits greedy, immoral humans against noble denizens of a faraway moon, "Avatar" is being criticized by a small but vocal group of people who allege it contains racist themes - the white hero once again saving the primitive natives.

Since the film opened to widespread critical acclaim three weeks ago, hundreds of blog posts, newspaper articles, tweets and YouTube videos have said things such as the film is "a fantasy about race told from the point of view of white people" and that it reinforces "the white Messiah fable."

The film's writer and director, James Cameron, says the real theme is about respecting others' differences.

In the film (read no further if you don't want the plot spoiled for you) a white, paralyzed Marine, Jake Sully, is mentally linked to an alien's body and set loose on the planet Pandora. His mission: persuade the mystic, nature-loving Na'vi to make way for humans to mine their land for unobtanium, worth $20 million per kilo back home.

Like Kevin Costner in "Dances with Wolves" and Tom Cruise in "The Last Samurai" or as far back as Jimmy Stewart in the 1950 Western "Broken Arrow," Sully soon switches sides. He falls in love with the Na'vi princess and leads the bird-riding, bow-and-arrow-shooting aliens to victory over the white men's spaceships and mega-robots.

Adding to the racial dynamic is that the main Na'vi characters are played by actors of color, led by a Dominican, Zoe Saldana, as the princess. The film also is an obvious metaphor for how European settlers in America wiped out the Indians.

Robinne Lee, an actress in such recent films as "Seven Pounds" and "Hotel for Dogs," said that "Avatar" was "beautiful" and that she understood the economic logic of casting a white lead if most of the audience is white.

But she said the film, which so far has the second-highest worldwide box-office gross ever, still reminded her of Hollywood's "Pocahontas" story - "the Indian woman leads the white man into the wilderness, and he learns the way of the people and becomes the savior."

"It's really upsetting in many ways," said Lee, who is black with Jamaican and Chinese ancestry. "It would be nice if we could save ourselves."

"Main white characters realize that they are complicit in a system which is destroying aliens, AKA people of color ... (then) go beyond assimilation and become leaders of the people they once oppressed," she wrote.

"When will whites stop making these movies and start thinking about race in a new way?" wrote Newitz, who is white.

Black film professor and author Donald Bogle said he can understand why people would be troubled by "Avatar," although he praised it as a "stunning" work.

"A segment of the audience is carrying in the back of its head some sense of movie history," said Bogle, author of "Toms, Coons, Mulattoes, Mammies & Bucks: An Interpretive History of Blacks in American Films."

Bogle stopped short, however, of calling the movie racist.

"It's a film with still a certain kind of distortion," he said. "It's a movie that hasn't yet freed itself of old Hollywood traditions, old formulas."

Writer/director Cameron, who is white, said in an e-mail to The Associated Press that his film "asks us to open our eyes and truly see others, respecting them even though they are different, in the hope that we may find a way to prevent conflict and live more harmoniously on this world. I hardly think that is a racist message."

There are many ways to interpret the art that is "Avatar."

What does it mean that in the final, sequel-begging scene, Sully abandons his human body and transforms into one of the Na'vi for good? Is Saldana's Na'vi character the real heroine because she, not Sully, kills the arch-villain? Does it matter that many conservatives are riled by what they call liberal environmental and anti-military messages?

Is Cameron actually exposing the historical evils of white colonizers? Does the existence of an alien species expose the reality that all humans are actually one race?

"Can't people just enjoy movies any more?" a person named Michelle posted on the Web site for Essence, the magazine for black women, which had 371 comments on a story debating the issue.

Although the "Avatar" debate springs from Hollywood's historical difficulties with race, Will Smith recently saved the planet in "I Am Legend," and Denzel Washington appears ready to do the same in the forthcoming "Book of Eli."

Bogle, the film historian, said that he was glad Cameron made the film and that it made people think about race.

"Maybe there is something he does want to say and put across" about race, Bogle said. "Maybe if he had a black hero in there, that point would have been even stronger."

Microsoft extends offer to Sony for 10-year deal on Call of Duty
Thanks for reading CBS NEWS.
Create your free account or log in
for more features.
View CBS News In
CBS News App Open
Chrome Safari Continue
Be the first to know
Get browser notifications for breaking news, live events, and exclusive reporting.