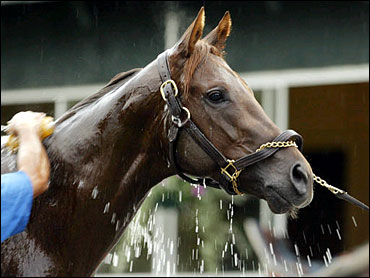 Smarty Jones' racing career is over.

The 3-year-old red chestnut colt whose bid for thoroughbred racing's Triple Crown came up one length short in the Belmont Stakes was retired Monday because of chronic bruising in his hoofs.

"It's tough," trainer John Servis said. "We had a great ride with him. It seemed there was no bottom to him. We made the decision in the best interests of the horse."

The Kentucky Derby and Preakness champion has not raced since the Belmont and was recently syndicated for about $48 million. He will stand at stud at Three Chimneys Farm near Midway, Ky.

In nine career starts, Smarty Jones won eight races and earned $7,563,535, including a $5 million bonus from Oaklawn Park for victories in the Rebel Stakes, Arkansas Derby and Kentucky Derby.

He already had withdrawn from the Sept. 5 Pennsylvania Derby because of the bruise on his left front hoof. The injury was treated about three weeks ago, and Servis was optimistic about running him in the Breeders Cup Classic on Oct. 30 at Lone Star Park in Grand Prairie, Texas.

Servis had hoped to run Smarty Jones in a warmup race before the Breeders Cup, perhaps the Super Derby on Sept. 25 at Louisiana Downs or the Pegasus at the New Jersey Meadowlands in early October.

But those plans were scrapped Monday.

"It's a very difficult decision," Servis said. "We'd definitely like to see him run again. If anything else went wrong, it would break our hearts."

After winning the Kentucky Derby and Preakness, Smarty Jones was a prohibitive favorite to become racing's first Triple Crown winner since Affirmed in 1978. But Birdstone caught him in the final furlong at the Belmont and hung on for a one-length victory.