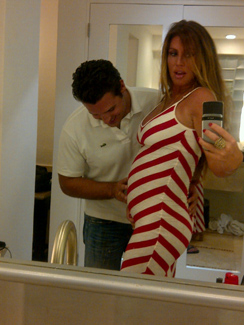 (CBS) Rachel Uchitel, the first woman to come out as being the former mistress of professional golfer Tiger Woods, announced that she is pregnant.

Uchitel tweeted pictures of herself and new husband Matt Hahn posing with her baby bump.

The former "Celebrity Rehab" star secretly married Hahn in October and the two have been living in San Francisco since their wedding, reports TMZ.

In 2009, Uchitel burst into the spotlight after claiming that she was the mistress of Woods, causing more than a dozen women to come out as Woods' mistresses. On "Celebrity Rehab with Dr. Drew" Uchitel claimed she was addicted to "love."