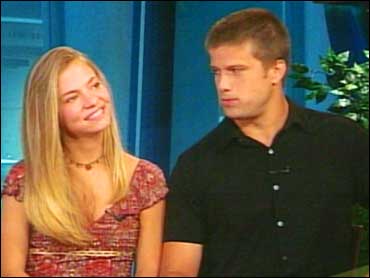 Thursday night's "Amazing Race" came down to the wire for embattled couples Kelly and Jon and Millie and Chuck, who raced neck and neck to the pit stop. Only seconds separated the winners from the losers.

Millie Smith and Chuck Shankles were the last team to arrive and they tell The Early Show co-anchor Harry Smith they still think about what they did wrong.

"We were like ten minutes, I think, away from the last thing we had to do before the pit stop. All we had to do was take a right. We could have asked anyone," says Chuck.

"We take a right, ten minutes we're there, then we go to the pit stop and we would be done. We would have made to it the next episode. Instead we went left 30 minutes and had to come back."

Chuck says he thinks about it almost every day. Millie adds that she also replays in her mind what she could have done better.

"If we have some spare time in our car or if I'm out running, I'm thinking, 'I could have outrun that team.' I think about that. It really was me. I bear the burden," says Millie.

Chuck quickly interrupts, "I tell her every day it was both of us."

Besides taking the wrong turn, the team says it was hard to watch the harsh comments made by fellow team members on TV. Millie's nickname was "Millie Mole" and Chuck was called a werewolf.

"They had never said anything like that to our face," notes Chuck.

Millie adds, "I was at a party with a bunch of people and then you hear that. Everybody immediately says, 'I'm so sorry,' which makes it even harder. What can you say about that?"

But Chuck says, "It's a competitive situation. Stuff happens like that. I was thinking last night, to be honest with you, I think they treat us probably nicer than they do one another."

"So we don't take it too personally," says Millie.

There were also personal hardships they encounter along their journey, but no matter the hardships, the couple from Chattanooga, Tenn., is still very much together after 12 years of dating.

"When we were racing, I think our personality contrasts, which we are very aware of, were very much apparent. It really heightened that," says Millie. "But the world is not a race for $1 million. So sometimes contrasts in real life can be nice."

But that doesn't mean that they will get married any time soon. When co-anchor Harry Smith presses Chuck to make a commitment, Chuck says, "Right. Right. I don't know. I'm speechless."

What he does know is that he would do the "Race" again if he had chance. "In a heartbeat," he says.