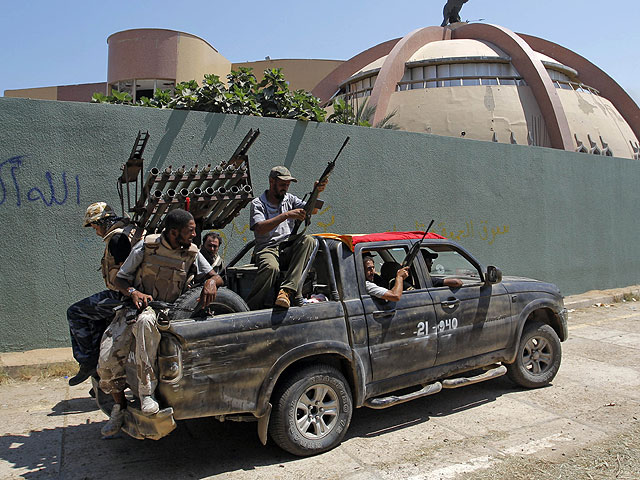 WASHINGTON - No one can be sure who controls the Libyan government's weapons stockpiles, a stew of deadly chemicals, raw nuclear material and some 30,000 shoulder-fired rockets that officials fear could fall into terrorists' hands in the chaos of Muammar Qaddafi's downfall or afterward.

One immediate worry, U.S. intelligence and military officials say, is that Qaddafi might use the weapons to make a last stand. But officials also face the troubling prospect that the material, which was left under Qaddafi's control by a U.S.-backed disarmament pact, could be obtained by al Qaeda or other militants even after a rebel victory is secured.

"We've got to secure these weapons depots that have huge, huge numbers of weapons, and apparently mustard gas and other weapons of mass destruction," Sen. John McCain, R-Ariz., said on "The Early Show" Tuesday.

The main stockpile of mustard gas and other chemicals, stored in corroding drums, is at a site southeast of Tripoli. Mustard gas can cause severe blistering and death. A cache of hundreds of tons of raw uranium yellowcake is stored at a small nuclear facility east of the capital.

Weapons demolition teams hired by the State Department have located and destroyed some of the anti-aircraft rocket systems in rebel-held parts of the country.

U.S. and allied officials say chemical and nuclear stockpiles appear to be still under the control of what's left of the Libyan government despite rebel military advances into the capital. That may or may not be reassuring. It depends on whether Qaddafi loyalists, increasingly desperate, adhere to international agreements not to use or move the material.

The State Department has also sent experts to Libya to confer with rebel leaders and Libya's neighbors about abiding by those same compacts and beefing up border security to prevent weapons from being smuggled out.

State Department spokeswoman Victoria Nuland said Tuesday the U.S. is working to ensure that "the governing forces in Libya have full command and control of any WMD or any security assets that the state might have had." Jamie F. Mannina, spokesman for the State Department's Bureau of Arms Control, Verification and Compliance, said Libya's known chemical weapons storage facilities have been monitored since the start of the civil war.

Still, many U.S. officials question whether NATO has enough people on the ground to make sure the material remains secure if Libyan security forces flee their posts. NATO's decision to limit its participation in the conflict has kept the coalition's investment in blood and treasure to a minimum. But that has not helped the cause of nonproliferation.

With the battle for the capital Tripoli still unfolding, military advisers from Britain, France, Italy and Qatar are feeding intelligence to the rebels and NATO bombers on the whereabouts of the enemy. That has left U.S. intelligence relying primarily on military drone, satellite and spy plane reports to track Qaddafi's arsenal.

"No one seems clear" how many of the estimated 30,000 anti-aircraft rockets, and other stockpiles still remain after six months of pounding by air strikes, according to a U.S. official who has been following the Libyan events. Officials spoke on condition of anonymity to discuss matters of intelligence.

As for chemical agents, said British Embassy spokesman Hetty Crist, officials are concerned about the security of some 11 metric tons of mustard gas.

Crist said the Libyan stocks are "under guard in secure and remote locations" at the moment and cannot be used easily for warfare because they are not weaponized.

Despite dismantling much of his nuclear program after making a deal with the Bush administration, Qaddafi has enough weaponry -- if he can still reach it -- to try to sell to militants.

"There are still going to be a lot of Qaddafi loyalists who could hijack the weapons supplies and use them for an insurgency like Iraq," said Democratic Rep. Dutch Ruppersberger of Maryland, a member of the House Intelligence Committee.

And if the material goes unguarded, it could be seized by al Qaeda militant sympathizers, he said in an interview Tuesday. "A single rocket can do damage," he said, recalling the downing of a Chinook helicopter Aug. 5 in Afghanistan from a rocket-propelled grenade fired by the Taliban, killing all 38 troops on board.

The State Department has spent $3 million on two international weapons abatement teams charged with finding and destroying the antiaircraft systems along with other lethal munitions and landmines.

The teams have demolished some of the shoulder-launched antiaircraft missile systems called MANPADS, including nearly 30 Russian SA-7 launchers, according to Alexander Griffiths, director of operations for the Swiss Foundation for Mine Action, one of the abatement groups.

But the teams are only scouring rebel-held battle sites and arms depots, and are not sent into combat hot zones.

Libya possesses a variety of leftover, aging weapons of mass destruction. Libya agreed to halt its WMD programs in 2003, under economic pressure from U.S. and Western embargoes. Qaddafi surrendered the hardware for his nuclear program and let the U.S. remove about 11.5 pounds of weapons-grade uranium from a nuclear research reactor near Tripoli in 2009.

But there are still some 500 to 900 metric tons of raw uranium yellowcake stored in drums at Libya's lone nuclear reactor, east of Tripoli. The supply is less of a worry for U.S. officials because it requires heavy industrial refining and enrichment before it could be used as an explosive. But it could be sold for a large profit to those more capable of building a nuclear weapon.

Qaddafi also had extensive chemical weapons, which his forces used against Libya's southern neighbor, Chad, in 1987.

After 2003, Tripoli closed its chemical weapons research and production facilities and destroyed 3,500 unfilled chemical shells used to deliver them on the battlefield.

But the scheduled destruction of some 23 tons of mustard gas didn't start until last year and was only halfway finished when the system used in the destruction broke, said Paul Walker of the environmental group Global Green, which closely monitors chemical weapons.

The remaining mustard agent is stored inside a domed concrete bunker a few hundred miles south of Tripoli, according to a U.S. official, who insisted on anonymity to speak about the WMD threat in Libya. The facility also had contained more than 1,300 tons of "precursor" chemicals that could be combined to make toxic agents, the official said.

The most pressing matter is to make sure the mustard gas does not end up on the black market or with terrorists, the official said. Stored in canisters that showed signs of corrosion during a 2006 visit by American officials, the chemicals could be easily moved.

Walker said he has heard no evidence that anyone has tried to divert the chemicals. "Any major action such as trucks pulling up, or major troop movements, that would be known pretty quickly," he said, "and action such as a NATO airstrike could be taken fairly quickly."

There is no indication that Libya has sarin, soman or other dispersible nerve agents that can cause death on contact. And Qaddafi's efforts to build a biological weapons program did not get far, according to the Nuclear Threat Initiative, a nonproliferation group.