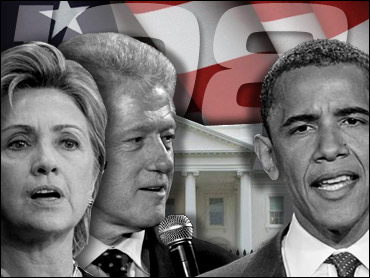 While a rainbow of faces stood at Sen. Barack Obama's rally in Reno, Nevada, today much of the talk offstage was about the raw and often divisive issue of race.

"Why not pick up the phone and call the Senator and say, 'why don't we stop this back and forth'?" CBS News correspondent Byron Pitts asked Obama.

"It's more back than forth," Obama said. "This is a strategy on their part."

Sen. Hillary Clinton's campaign blames Obama's. Its a "who said what" that started last Monday after Clinton said this: "Dr. King's dream began to be realized when President Lyndon Johnson passed the Civil Rights Act of 1964."

Clinton says her words were taken out of context by the Obama campaign, but many took them as a slight on Dr. King.

Race will matter in the all important South Carolina primary - in 12-days - when 50 percent of democratic voters are black.

According to the CBS News/New York Times poll, 49 percent of blacks nationwide now support Obama; 34 percent for Clinton. That's a 13 percent jump for Obama since August

"Hillary and Bill Clinton, who have been deeply and emotionally involved in black issues - when Barack Obama was doing something in the neighborhood … I won't say it, but he said it in his book," Johnson said, alluding to drug use.

Pitts asked Obama: "Bob Johnson seems to suggest that while the Clintons were working on civil rights work, you were doing drugs in Chicago."

Obama said: "I think we're entering into the silly season of politics now."

With the Michigan primary tomorrow and Nevada caucus on Saturday, voters in Detroit are more concerned about jobs than about race.