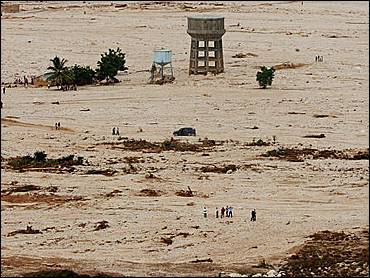 With dark clouds moving in and more rain predicted, U.S. and Canadian troops raced against time Thursday, hurrying to a small town where up to 1,000 people were feared dead from floods that wiped out villages across Haiti and the Dominican Republic, and created one of the worst disasters to hit the Caribbean in decades.

Kevin Cook of World Vision, an international Christian development and relief organization, was in Jimani Wednesday.

"The floodwater has subsided, but it's left just a huge swath of boulders and uprooted trees and vehicles, and destroyed houses in its path, so what you see is a wasteland of destruction," he told CBS Radio News.

With most of the town submerged in 10-foot waters, as many as 1,000 people were feared dead, said Margarette Martin, the government's representative for Haiti's southeast province. About 300 bodies had been counted so far in the town, and many more have yet to be collected, said Dr. Yvon Lavissiere, the health director for the region.

"In Mapou, the situation is serious because the entire town is submerged in water," said U.S. Marine Lt. Col. Dave Lapan, a spokesman for the U.S.-led multinational task force in Haiti. "We're also fighting time because weather is turning bad again."

Rains over the weekend lashed the island of Hispaniola, which Haiti shares with the Dominican Republic, sweeping away entire neighborhoods early Monday.

"Everything is in heaps, there's rocks everywhere and they are still taking out bodies," said Cook. "No one really knows how high the death toll could go."

The U.S. National Weather Service said Thursday at least 3 inches of rain were expected for the southern border region between Haiti and the Dominican Republic.

Of more than 450 bodies recovered in Haiti, most were found in Mapou but about 100 were found in the southern town of Grand Gosier, said Civil Protection Director Marie Alta Jean-Baptiste. Fifty more corpses were found elsewhere in Haiti, officials said.

"The river took everything, there isn't anything left," said Jermanie Vulsont, a mother who said the rushing water swept away her five children in Fond Verrettes, about 35 miles southeast of Port-au-Prince, and covered in mud.

Rushing waters and mudslides swept away most homes in Fond Verrettes, leaving it looking like a barren riverbed with stunned residents wondering about and asking troops for help.

"For a while we didn't even realize what we were standing on," said Lance Cpl. Justin Collins, 21, of Avon, Illinois, one of about 20 U.S. Marines who went to help feed villagers. "We were standing on some parts of a neighborhood."

"This situation is grim and we're looking at ways to get more money here," said U.S. Ambassador Hans Hertell after surveying the damage.

Nearly 700 Red Cross volunteers were helping survivors in the town and in nearby hospitals, said Lara. Workers were putting up mosquito nets to prevent outbreaks of malaria and dengue, diseases caused by parasite-infected mosquitoes. There have been no major disease outbreaks yet.

The floods struck before dawn Monday while people were asleep. In Jimani, Leonardo Novas awoke to the screams of son while water rose in his wooden house. He huddled with his wife and three children, and shouted to his brother next door to stay inside but it was too late.

"Everything's gone. My house and five family members," said Novas, 28, who watched his brother and the brother's family carried away in a crushing torrent of mud.

Dominican authorities buried more than 250 bodies immediately, some where they were found and others in a mass grave. Authorities told families there was no time to identify many of the bodies because they were badly decomposed and posed health risks if moved.

Jimani, about 100 miles east of the Dominican capital of Santo Domingo, is inhabited mostly by Haitian migrants who work as vendors and sugar cane cutters. Dominican officials said some of the Haitians who lost relatives may have been living in the town illegally and were scared to identify bodies.

The death tolls have been high because the border area is largely deforested and many of the poor have built poorly constructed homes out of wood and tin. Hundreds of homes were destroyed on both sides of the border.

The floods were some of the deadliest in the region in recent years. In 1994, Tropical Storm Gordon caused mudslides that buried at least 829 Haitians. As many as 15,000 people are estimated to have died in 1999 flooding and mudslides in Venezuela.

The Dominican government declared Jimani a disaster area, and President Hipolito Mejia said Thursday would be a national day of mourning.