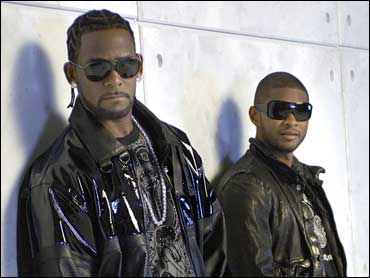 R. Kelly has done it again. He has created another video masterpiece — replete with twists and turns — but this time with another R&B heavyweight, Usher.

The funny thing about R. Kelly is that amidst all the aburdity, he takes himself so seriously. Case in point, 2005's "Trapped In the Closet."

In the much-anticipated and hyped duet with Usher, "Same Girl" the two crooners are having a casual conversation about Kelly's new girlfriend. It starts in their respective lavish mansions when Kelly calls Usher on his cell phone.

"She drives a black Durango license plate say 'Angel,' tattoo on her ankle," Kelly tells Usher. "Plus she's making pesos she got a crib on Peach street down on 17th street. And I call her 'TT.'"

"Wait a minute, hold on dawg. Do she got a kid?" Usher asks.

It continues like this until the two confirm that "We messing with the same girl."

It's a rare thing to hear of two male hip-hop stars getting played by a female. Surprisingly, Kelly (who is charged with having sex with a minor) seems legitimately devastated that the woman he says could be his future wife is flying back and forth between his home in Chicago and Usher's home in Atlanta.

The newest R. Kelly video is not quite as absurd. In fact, compared to "Trapped in the Closet," it's actually plausible. In "The Same Girl," directed by Little X, Usher and Kelly embark on a journey to find this girl.

Kelly hops on a jet to Atlanta where Usher picks him up. They hug realizing they were had by a master player. They smoke fine cigars, drink Hennessey and play basketball while they try to get to the bottom of the mystery. Finally Usher calls her and Kelly gets on the phone. They set up a meeting where they hope to catch her in the act. But the twist: The girl is actually a pair of twins. No one was cheating. Hurray.

The song and the video reinforces R. Kelly's fascination not only with sex (which has been apparent since the days of "Bump and Grind") but also deception and distrust.

It could make one wonder what is the self-proclaimed "King of R&B" showing us about his own fears and weaknesses?