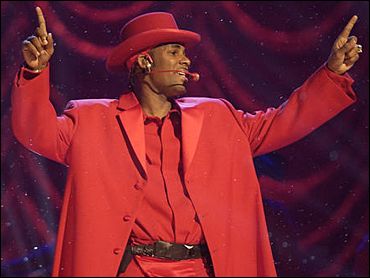 Prosecutors here dropped all child pornography charges against R. Kelly after a judge ruled that photos allegedly showing the rhythm and blues singer having sex with an underage girl were illegally seized.

The decision, announced on Wednesday, doesn't mean that the singing star is out of trouble. He still faces 14 counts of child pornography in his home state of Illinois stemming from a videotape allegedly showing him having sex with an underage girl.

But last week, Circuit Judge Dennis Maloney agreed with Kelly's attorneys that the Polk County sheriff's detectives did not have enough evidence to justify a search of Kelly's Davenport home when the deputies asked a judge for a warrant in June 2002.

The photographs were on a digital camera that was wrapped in a towel inside a duffel bag.

Prosecutors decided not to appeal Maloney's decision and instead dropped the 12 charges against Kelly, Assistant State Attorney Chip Thulberry said.

Kelly, whose first name is Robert, is a best-selling singer, songwriter and producer who has worked with artists ranging from Britney Spears to Michael Jackson. His hits include "Ignition," "Step in the Name of Love," and "I Believe I Can Fly."