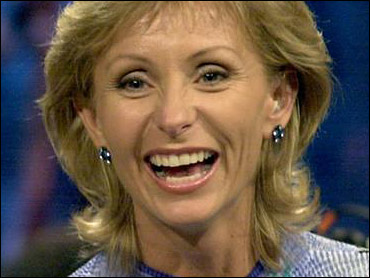 Success is sweet, but not always so easy to live with. Tina Wesson of "Australian Outback" fame was first to be ejected from "Survivor: All-Stars." The Knoxville mom says as a previous winner, she felt like she "had a big target" on her chest.

Jenna Lewis, last seen on "Pulau Tiga" (yep, the very first "Survivor") was gunning for her from the get-go.

"Not necessarily me," Wesson clarifies to The Early Show co-anchor Harry Smith. "Just the winners. It doesn't matter who was out there. If they were a winner, they were targeted."

Wesson, lasted only three days in rainy Panama, where she and the 17 other castaways matched wits while scrounging for food, water and fire.

"I kinda expected it," said Wesson after being ejected in a vote by the Saboga tribal council, "but it doesn't make it any easier."

The fact that she knew it was coming didn't keep her from giving the game another shot. She said it represented an opportunity to grow as a human being.

Fear of the 42-year-old Wesson's abilities - and her potential to win again - is believed to be behind her ouster by her fellow tribe members.

Lewis might want to watch her back as well. She got two votes for expulsion, not enough to doom her right off the bat.

Don't miss an encore presentation of the Survivor: All-Stars premiere Tuesday night, February 3rd, at 8 p.m. ET/PT
Wesson said she tried to make a deal with Rupert Boneham of "Survivor: Pearl Islands." She says, "I knew I could not win with that tribe. I knew I was a goner. And as soon as I saw Rupert, I said, I will do everything in my power to help Rupert to win. I told him at tribal council, do not hook up with Jenna and Jerry. They need the money. You cannot go up against them. They will vote you off."

Her strategy was sort of a pay it forward, Wesson says, because Colby Donaldson had adopted a similar strategy in helping her win. She had planned to do the same with Rupert Boneham. Unfortunately, she says, "He went to the dark side."

Hard also for Wesson and her tribe was the environment. She explains, "Panama was so much harder, the fact we didn't have water. Rupert was already dehydrated. That's part of the reason why we lost that first challenge. We did not have any bugs in Australia. None whatsoever. That first night, I probably had a good 50 bites on me that first night. It was awful."

But not all was unpleasant. Wesson notes she was surprised Jerri Manthey was quite a different person.

"She was a different person this game," Wesson says, "She was so much more pleasant. I told her, if you had been this nice on the first one, we wouldn't have voted you out. She learned her lesson."

Another surprise was finding out that fellow Outback contestant Mike Skupin was not playing the game. Wesson says, "He deserved to have been there." Skupin passed out into the fire burning his hands, and became the first contestant to drop out.

Wesson notes, "To have endured everything that he has gone through, to not be able to finish his game. And he loves the game of 'Survivor' anyway. I just think he deserved a second shot. He was a great player. He's strong. He would be a great player."

She was glad, however to see her old friend, Colby Donaldson. She says, "Actually I was hoping, even after seeing the tribe, they would mix us up. I was hoping that was not my tribe. It wasn't until going into the first challenge I said, 'Oh, my goodness, they're going to keep us with this group.'"

Still, she says she was happy not to be in Richard Hatch's tribe. "I was hoping I wasn't going to see him naked," she says.

Now that she is out of the game she tells a caller she was happy to return home to her family. Being a "Survivor" winner, she says, has changed her life. She says, "We made a lot of real estate investments and I'm an investor in Reality Central, which is a new reality network we hope to have on a show. I have a book." And the former nurse is a motivational speaker.

There are 36 more days left to unfold - with three tribes, Saboga, Mogo Mogo and Chapera - before the sole Survivor is left standing on his or her way to the bank with the winnings from "Survivor: All-Stars."

The initial action, as always, consists of the contestants sizing up both each other and the physical challenges of the location.

In this case, the sizing up of the human factor is a little different, since everyone has been on a previous "Survivor" - four, including Wesson, as winners.

After a top-secret journey through Panamanian waters, the three tribes were dropped off in the rough terrain that would become their camps. They were given maps, then sent off to fend for themselves.

As the Chapera tribe made its way through the brush, they came upon a well filled with contaminated water that would need to be boiled. Disorganized, the tribe focused on where to build their shelter. "It wasn't five minutes; there was six ideas on how to do everything," laughed Tom Buchanan, 48, last seen on "Survivor: Africa."

It didn't take much time for the alliances to start within Mogo Mogo, where paranoia ran deep as the tribe set up their camp. Members were quick to break away from each other while whispers abounded. It all ended with a mutual agreement that nobody trusted anybody else, and all alliances would wait until camp was set up. Upon seeing a naked Richard Hatch, Shii Ann Huang, 30, who made her mark on Survivor: Thailand, commented, "This is off to an interesting start."

Dehydrated, the tribes desperately needed fire in order to boil the water. As the members of the Chapera tribe worked feverishly to ignite a flame, Sue Hawk, 42, of Palmyra, Wis., - a veteran of the first "Survivor" - announced that this was a task she would take no part in. Sue decided instead to risk her health by drinking the contaminated water without boiling it. Sue's actions immediately alienated the rest of tribe.

Over at the Saboga camp, efforts to ignite a fire were also in vain. Finding themselves alone for the first time, Rudy Boesch, the 75-year-old who won fans on the first Survivor, and Rupert Boneham, 40, of "Survivor: Pearl Islands," wasted no time in forming an alliance.

"Why in the hell did I ever come back here?" Boneham groused, as the rain continued its steady assault. "I'm doing this for my wife and my daughter."

Boesch, eyes on the prize, struck a more diplomatic note.

"I'm 75 - I ain't what I used to be," said Boesch, praising the skills of other members of the Saboga tribe.

Is it a frank admission of the toll of time, or, just a way to lull other contestants into complacency before they are Boesched?