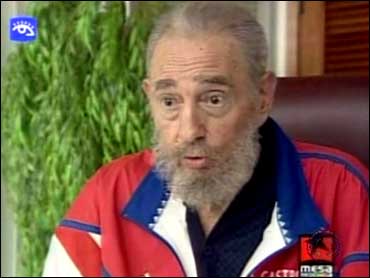 The question most asked by Cubans in recent months was answered today with the nomination of their top leader Fidel Castro for a seat in the nation's parliament. His election to that body next January 20 is now a given, making him eligible to hang on to the presidency temporarily relinquished July 31, 2006.

Castro whose poor health has kept him out of the public eye for most of the past 16 months was approved as a candidate by the municipal assembly in Santiago on the eastern end of the island, where he has traditionally been nominated for parliament ever since the Cubans established their electoral system in 1976. Parliament or National Assembly elections are held every five years.

Speculation on whether or not Castro would run for office has been widespread ever since he underwent life-saving intestinal surgery on July 27, 2006. Five days later he formally, if temporarily, handed over power to his younger brother and first Vice President of the Council of State Raul Castro, who under the Cuban constitution is next in line in the event the President is incapacitated or dies.

Although he has kept a low profile while running the country, Raul Castro did make a major policy speech four months ago that led many Cubans to believe he might be elected President when the new parliament meets for the first time. That meeting probably won't occur until March, according to current parliament member and top Communist Party official Fernando Remirez, who says a month usually elapses between the elections and the sitting of the new body.

Analysts have suggested that the elder Castro might retain leadership of the powerful Communist Party and hold the place of elder statesman, based on the belief that the day to day running of the country is too strenuous a position for an 81-year old who has undergone multiple operations for a still undisclosed illness.

Although it is possible that Castro could be elected to parliament and even to the Council of State without being elected President of that body there are clear indications that this will not happen. In fact, current parliament president Ricardo Alarcón suggests Castro will be a shoo-in for the country's presidency.

"If he were deputy [i.e., a member of parliament], I'm sure that he would be the best candidate we can have for President of the Council of State and certainly he would have my two hands' votes," declared Alarcón at the conclusion of a municipal assembly meeting in Havana, in which he was also re-nominated as a candidate for the new parliament.

According to the Cuban Constitution the parliament elects the Council of State which then elects its President, who is automatically appointed head of the Council of Ministers. That means Castro would once again be both Head of State and Government.

While the public has only seen Castro in still photos or government edited video since his illness, the Cuban leader has written more than 60 editorials, primarily on international issues, for the local press. He has not written about his health and the only public comment by other Cuban government figures is that "he is recovering". Privately, it is said that Castro had come close to death more than once since his first operation.

Top leaders, such as Alarcón and Vice President Carlos Lage, have repeatedly said that Castro's recovery has not prevented him from being involved in the country's most important decision making.

But the question remains open: will Castro, once elected, be recovered enough to attend the gathering of the new parliament next March? And, will he go along with the sentiment expressed by Alarcón, that he is the "best candidate" to head the Council of State? Or will he decide that a behind the scenes role is more suitable in his present condition?

One thing we can be certain of in this tightly controlled society is that Castro's nomination Sunday morning as a candidate for parliament did not surprise the ailing Cuban leader. It would not be amiss to imagine that he is spending the day not watching the results of the Cuban electoral process but rather following the much more contentious voting in Venezuela where his close ally President Hugo Chavez is facing what might be his most difficult referendum ever. If Chavez wins, as he predicts, the "Si" or "yes" vote, it will remove any limits to how many times he can be reelected, as part of a constitutional reform.

In an editorial last week on the situation facing Chavez, Castro pointed out Venezuela's economic importance to Cuba, accounting for $70 billion in trade and exchange of services, as well as accounting for the bulk of the island's fuel supply.

Nevertheless, Alarcón insisted Sunday that it's not a question of personal interest. "Fidel not only referred to the impact on Cuba. He said, just imagine for a moment, that if there were to be an assassination or an assassination attempt or a civil war in Venezuela, the consequences for oil market would be unpredictable and terrible and would affect not only Cuba but everybody without exception, not excluding certainly the US which is the most avid oil consumer in the world as you know," said the head of the Cuban parliament.

After expressing his confidence in a victory of the "Si" vote, Alarcon emphasized, that no matter which way the vote on constitutional reform goes, "Tomorrow they [the Venezuelans] will have the same government, the same National Assembly and the same Revolutionary process."

But there is no doubt that a victory for the Venezuelan President will provide a psychological boost for Fidel Castro, a vocal supporter and mentor of Chavez, who has often said he looks upon the legendary Cuban leader like a father.