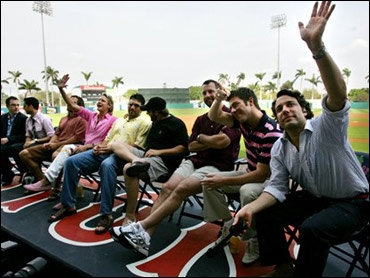 Known for their scruffy hair, unshaven faces and dingy gray uniforms, the Boston Red Sox need a makeover. At least that's what their wives say.

A handful of Boston wives took their idea to cable's most talked-about makeover show, "Queer Eye For The Straight Guy."

"Queer Eye" is Bravo's glitzy makeover show featuring five gay stylists: an interior designer, a fashion stylist, a chef, a beauty guru and a cool-hunter, who revamp the personal style of a "style-deficient and culture-deprived straight man." The show was recently awarded the 2004 Emmy Award for Outstanding Reality Program.

Damon said hands off the hair. He nixed cutting his famous long locks during taping for an appearance on the cable show.

A contract for his book being issued in April requires him to keep his hair long. His book tour begins next month.

Damon and other Red Sox stars are riding high from their last-season World Series win — their first in 86 years. Boston fans have come to associate a casual, husky appearance with their favorite Sox players. Damon, at spring training, was spotted with shoulder-length tresses and several days' accumulation of facial stubble.

Taping began yesterday while the Red Sox go through spring training in Florida.

And it turns out the Sox may even have helped the Fab Five. Fashion adviser Carson Kressley says "They're teaching us how to spit."

The team's reputation for looking gruff took to the national stage last year when their rivalry against the strikingly clean-cut New York Yankees intensified as Boston exorcized the "curse of the Bambino" by winning the World Series.

Boston's win against the St. Louis Cardinals was the team's first since 1918.