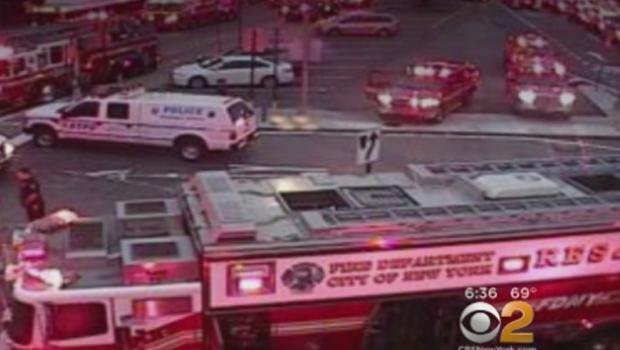 NEW YORK -- Three people are now confirmed dead in a crash involving a city bus and a private tour bus Monday morning in Queens that also left more than a dozen others hurt.

CBS New York reports the two buses collided around 6:18 a.m. on Main Street and Northern Boulevard in Flushing, sending one of the buses crashing into a restaurant.

Police said a pedestrian, the driver of the tour bus and a passenger on the MTA bus were killed in the crash. Sixteen others were hurt in the crash, including some who are in critical condition.

"We've had a really tragic morning here in Flushing, Queens" Mayor Bill de Blasio told reporters at the scene. "Just shocking to see the scene over there, hard to compare it to anything I've ever seen — the sheer destruction from the impact of this collision."

Authorities said they are checking to make sure there are not any additional victims inside the building or trapped beneath the buses. Firefighters responding to the scene also extinguished a fire that broke out inside the restaurant.

The cause of the crash remains unclear, but MTA Chairman Joe Lhota said speed appeared to be a factor.

"As we observed, the buses spun around," he said. "That requires an enormous amount of speed."

Investigators say they are trying to track down surveillance video so they can get a better idea of what happened in the moments leading up to the crash.

"We want to make sure that we understand exactly what happened and we prevent this from every happening again," Lhota said.

Crews are also concerned that the building is not secure, so they are working to shore up the structure, CBS New York. De Blasio said the impact of the crash to the building was "substantial."

Drivers should expect extensive traffic delays in the area.