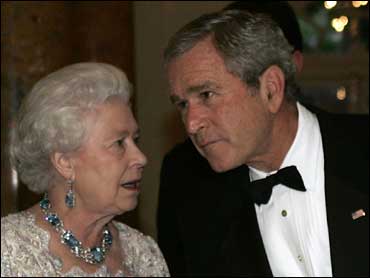 The queen had the last laugh.

Dispensing with protocol briefly at the formal dinner she hosted for President Bush, Queen Elizabeth said, "I wonder whether I should start this toast by saying, 'When I was here in 1776.' "

The joke was at the expense of the president — the same president whose wife said he had to be talked into putting on the most formal dinner a White House can host — a white-tie affair.

Bush took it in stride, though, starting his toast by saying, "Your Majesty, I can't top that one."

Tuesday night's royal teasing contrasted sharply with the tightlipped, high-protocol, much-orchestrated style that characterized the British monarch's six-day U.S. tour. It was in reaction to Bush's faux pas Monday after he formally greeted the queen with trumpets, a 21-gun salute and a march by the Old Guard Fife & Drum Corp.

Photos: Dinner Fit For A Queen

At one point in the South Lawn ceremony, Bush noted that the queen had dined with 10 U.S. presidents and had helped the United States "celebrate its bicentennial in 17 ... ." Bush caught himself and corrected the date to 1976." This brought loud laughter from many in the invited audience of thousands.

A chagrined Bush deadpanned that the queen just "gave me a look that only a mother could give a child."

When asked Tuesday what she had told him, Bush deferred, perhaps deciding to keep it to himself. "Nah, she didn't say anything," he told reporters.

The year 1776 cannot be a favorite year for the queen. It is the year when the monarch at the time of the American Revolution, George III, lost his richest colony.

At the Tuesday night dinner, the 81-year-old queen went on to toast her country's close relationship to the United States.

The queen concluded a rigorous schedule of events marked by frequent changes in dress and a series of colorful hats.

In Virginia, she visited Jamestown, America's first permanent English settlement, returning to a spot that she had seen as queen in 1957, when Bush was not yet a teenager.

In Kentucky, she attended for the first time America's most famous derby, after countless scores of equestrian events at home in Britain.

In Maryland, she watched as astronauts told by video-link of their work aboard the International Space Station while she visited NASA's Goddard Space Flight Center.

In Washington, she honored American soldiers at the National World War II Memorial, visited sick children at a hospital and stood graciously as the president started to suggest she had lived in the 18th century.